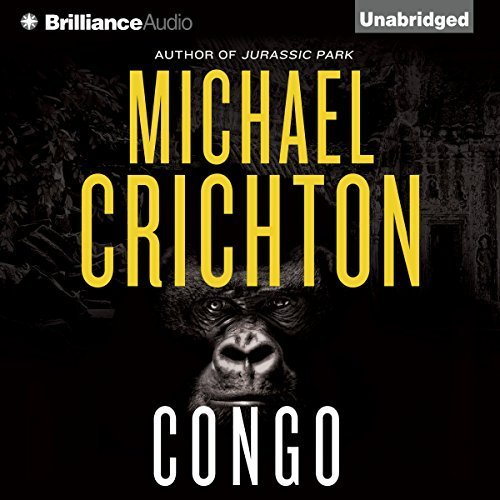 Many have come… none have lived to tell the tale.

Having watched another group of geologists from her company brutally murdered near the Lost City of Zinj, Karen Ross wants another shot at it.  This time, she wants to go herself.  She forms a ragtag group of scientists, military, and a gorilla handler/scientist Peter Elliot and his gorilla Amy.  Together this team will face off against pygmy’s, an army, and a secret group of creatures that aren’t content until every last one in the group is dead.

The narration for this was done by Julia Whelan and she does an absolutely epic job.  She was able to take Crichton’s classic fast-paced action and make the audiobook listener feel that speed.  Sometimes when I’m reading a well written thrilling part of a novel, my actual reading pace will speed up.  Well, Whelan was able to make me feel that without losing enunciation or actually speeding up all that much.  Overall, Crichton would be proud of her narration.

I swear I must have lived under a rock; I haven’t seen the movie that was based on this novel OR read the novel (and I’m a huge Crichton fan).  This book was great; I now definitely need to go watch the move to see how well they adapted it.

Then, when I saw how long ago it was written, that also blows my mind.  Crichton was a true visionary when it came to writing Technothrillers.  They were both believable and a lot of the time – they were also correct as to what would happen in the near future (which is why Jurassic Park is so terrifying).

I’m really glad that I was able to listen to this so many years after it was written and have it still hold up.  The staying power of Crichton’s novels is incredible to me.  To write a book that explains where he thinks we’re going, or include new technologies that don’t exist yet – and have most if not all of them come true is truly amazing to me.

If you haven’t given Congo a chance yet, you should – you won’t be disappointed.

Deep in the African rainforest, near the legendary ruins of the Lost City of Zinj, an expedition of eight American geologists are mysteriously and brutally killed in a matter of minutes.

Ten thousand miles away, Karen Ross, the Congo Project Supervisor, watches a gruesome video transmission of the aftermath: a camp destroyed, tents crushed and torn, equipment scattered in the mud alongside dead bodies - all motionless except for one moving image - a grainy, dark, man-shaped blur.

In San Francisco, primatologist Peter Elliot works with Amy, a gorilla with an extraordinary vocabulary of 620 "signs," the most ever learned by a primate, and she likes to finger paint. But recently her behavior has been erratic and her drawings match, with stunning accuracy, the brittle pages of a Portuguese print dating back to 1642…a drawing of an ancient lost city. A new expedition - along with Amy - is sent into the Congo, where they enter a secret world, and the only way out may be through a horrifying death.....

Congo was adapted to the screen and directed by Frank Marshall.

Also by this author: Jurassic Park, The Andromeda Evolution 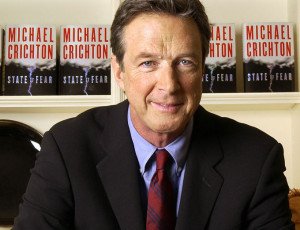 Michael Crichton (1942–2008) was one of the most successful novelists of his generation, admired for his meticulous scientific research and fast-paced narrative. He graduated summa cum laude and earned his MD from Harvard Medical School in 1969. His first novel, Odds On (1966), was written under the pseudonym John Lange and was followed by seven more Lange novels. He also wrote as Michael Douglas and Jeffery Hudson. His novel A Case of Need won the Edgar Award in 1969. Popular throughout the world, he has sold more than 200 million books. His novels have been translated into thirty-eight languages, and thirteen have been made into films.

Michael Crichton passed away from lymphoma in 2008. He was 66 years old.

Dawn of the Storm (Raina Storm #1) by Ki

One thought on “Audiobook Review: Congo by Michael Crichton (Narrated by Julia Whelan)”