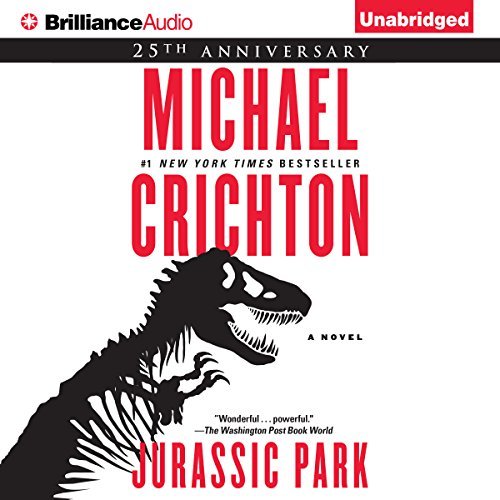 One of the greatest books I’ve ever read

Welcome to Jurassic Park. I’m sure that most of you have seen the movie or read the book.  But if you haven’t — Jurassic Park is a “theme” park that’s main attractions are genetically brought back Dinosaurs.  No animatronics or misdirection.  These are real flesh and blood dinos.  The unfortunate part about using real animals is that they are unpredictable.  And you can guess where this unpredictability goes.

The narration for the 25th Anniversary Edition of Jurassic Park was done by Scott Brick who just absolutely blows this away.  It has to be hard to narrate such an iconic book when it has a cult following and when there is a movie based off of it too.  You would already have voices in your head for some of the characters.  But Brick just crushes it.  He gave me goosebumps numerous times in his reading of this.

Jurassic Park the novel is probably one of the books I keep highest on my review pedestal.  I was a little worried that going back to it more than 10-15 years after first reading it and having seen the movie probably 30 times that it wouldn’t have the same edge.  I couldn’t have been more wrong.  I knew that Crichton could write.  I knew he was innovative, writing about powerful computers in books like Jurassic Park and Congo before they were even on the horizon. But I forgot just how good Crichton was at holding my attention.

Jurassic Park STILL gave me goosebumps years later.  It still had me hiding under the covers. And wondering what would happen next. If you are one of those people who think, “is the book really that much better?”  Yes, yes, yes.  A thousand times over yes.  You need to read this book.  You will see how visionary Crichton was.  You will also notice that pieces of ALL FOUR movies were picked from this novel (and if you pick up The Lost World After, you’ll see even more). There are scenes in this that made it into every movie that was associated with the Jurassic Park namesake.

I could write for days about this book, but know that this 25th Anniversary Edition is incredible.  Scott Brick brings this book to life, which when you’re reading it makes for some scary stuff!  Please do yourself a favor and check this book out. I promise you won’t regret it.

An astonishing technique for recovering and cloning dinosaur DNA has been discovered. Now humankind’s most thrilling fantasies have come true. Creatures extinct for eons roam Jurassic Park with their awesome presence and profound mystery, and all the world can visit them – for a price.

Until something goes wrong….

In Jurassic Park, Michael Crichton taps all his mesmerizing talent and scientific brilliance to create his most electrifying technothriller.