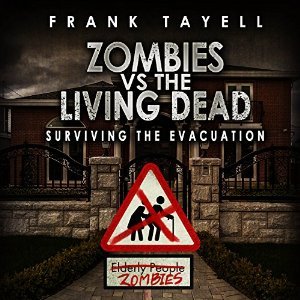 Short and sweet, a great intro to the STE world

What happens to senior citizens once the world ends.  Well, the world has ended, but it is ending.  Zombies are rising up and killing and infecting anything they can lay their hands on.  Zombies vs. the Living Dead takes a look inside a senior home during the apocalypse.  What would happen? How would the “living dead” survive a zombie attack?

Tim Bruce provides the narration for this story and does a really nice job. I really felt like he was there when all of this went down.  Bruce provides the perfect narration to move this already quick story along even faster.  I’m excited to hear more stories narrated by him.

Zombies vs. The Living Dead was a great first glance into the world that Tayell has created with the Surviving the Evacuation world.  I have the other books in the series to read, but I decided to dip my toes in the water with this one. Short and sweet, I got a really nice look into the way that Tayell writes and a quick glance at the world that he will be creating (and destroying) in the other books.

The actual story was really well done.  I’d never seen the angle that Tayell took, and I liked it.  I also liked that the main character wouldn’t give up on the woman he’d be caring for, even with the world crashing down around him.

A quick hitter, Zombies vs. the Living Dead was a really enjoyable book. And now I can’t wait to dive into the rest of the series.

No one is safe from the undead.

The outbreak began in New York. Within days it had spread throughout the world. No one is safe from the undead.

As anarchy and civil war took grip across the globe, Britain was quarantined. The press was nationalised, martial law, curfews and rationing were implemented. It wasn’t enough. An evacuation was planned. The inland towns and cities of the United Kingdom were to be evacuated to defensive enclaves being built around the coast, the Scottish Highlands, and in the Irish Republic.

For George Tull and the other residents of the Waverly-Price Retirement Home, walking to the coast is not an option. Abandoned by the staff, they wait for rescue. It doesn’t come. When George leaves the illusory security of The Home and ventures into the nearby village, he finds it deserted. But he is not alone, his unhappy retirement is broken by the undead. George is left with a terrible choice; stay and fight to save the people he loathes, or leave and abandon the woman he has come to love. (15,000 words)

I’m just an ordinary guy who sat down one day to write a book. Years passed. Eventually, I published Surviving The Evacuation: As anarchy and civil war took grip across the globe, Britain was quarantined. The British press was nationalised. Martial law, curfews, and rationing were implemented. It wasn’t enough. An evacuation was planned. The inland towns and cities of the United Kingdom were to be evacuated to defensive enclaves being built around the coast, the Scottish Highlands, and in the Irish Republic. The Evacuation failed. Nations have fallen. Societies have collapsed. Those who are left struggle for survival in a world where zombies are not the only thing to be feared. To join the mailing list or for more information go to www.franktayell.com

‘Work. Rest. Repeat.’ A novel of post-apocalyptic Britain, where the last few thousand survivors of The Great Disaster struggle to complete the colony ships that will enable them to escape a desolate Earth. The exodus is put in peril when, with an election just hours away, two workers are murdered.

History’s End, a new apocalyptic short story, chronicling the end of our civilisation, is out now in the charity anthology ‘At Hell’s Gates 2’.

One thought on “Audiobook: Zombies vs. the Living Dead by Frank Tayell (Narrated by Tim Bruce)”