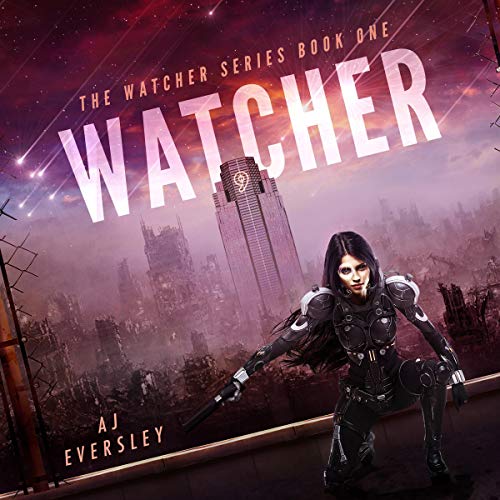 Watcher is the first book in The Watcher Series, and it starts off a series that I really enjoyed beginning to end.

Now, I’m not always a fan of when an author includes an “it’s like this thing you like meets this thing you like”.  It always feels like they are trying to link themselves to something more famous even if their books have nothing to do with it (or very little).  Fortunately, for Watcher – Eversley was dead on.  It was really like Divergent meets Terminator.  It had the dystopian groups (the Watchers reminded me a lot of Dauntless).  And then there were humanoid robots and Carbons who were out to destroy the remaining humans in pretty much any way they could.  I’d say that comparing it to those two films (and books) was pretty dead on.

Sawyer was a slight cookie cutter heroine but it didn’t take away from the story at all.  She was kind of reckless – putting herself and others in danger when she didn’t really need to, wasn’t really a rule follower, etc. While these are all the norm for books like this. Sawyer was given a little more to like.  The guy she meets later in the story is also a little typical (sort of bad boy but also good for her). In my eyes, in YA books like this, it’s as much about the world and the interaction with it as it is the characters.  I also assume it’s really hard to make a standout and unique character when you have the Katniss and Tris’s of the YA Dystopian world without making them a little similar.

I was a big fan of Divergent and I thought that Eversley created a world that was more interesting while also making the story stand on its own.  Sawyer was one of those should be forgetful characters but something stuck out to me about her.  I think the flashbacks and the “it’s been 10 years” parts of the book (taking her from 8 to 18) made me feel for her on a deeper level. Realizing that she was basically raised to be a Watcher and nothing else (no teenager moments, boys, etc).

I’ve never read anything by Eversley before – but I will be continuing the series.  I think that it translated really well to audio especially with Chelsea Stephens at the helm.  She was able to give a voice to Sawyer – allowing her to jump off the page.  The addition of Steven Campbell was also needed in my opinion.  For Chelsea to read his parts (even if they were in the third person) would/could have been jarring.  But having a male narrate the major male character (especially while getting a glimpse into his mind) really stood out to me. I think it was needed and allowed Chelsea to focus on moving Sawyer forward without much distraction or interruption.

Overall, a YA Dystopian novel that was a genuine surprise to me.  So many books try to be the next YA hit and fail on so many levels – but Eversley including the typical YA fare with brooding teenagers, first loves, and suspense. But also threw in a lot of heart, some betrayal (I guess this is pretty typical too), and freakin’ robots!

If you liked Divergent or Terminator – give this one a try.  If you like YA Dystopian Trilogies – I couldn’t imagine this letting you down.

Sawyer’s life is simple, if not easy. Her home might be in ruins, but she can protect what’s left of it.

A city destroyed by the bots – that’s home. Humans have been hunted, but Sawyer is one of a few who have turned the tables. She’s a watcher. Taking out the bots one by one. Protecting what’s left. It’s the carbons she needs to be wary of. Faster and stronger than humans, they’re dangerous. But Sawyer’s smarter. That will keep her alive.

At least, that’s what she believed. But the carbons are evolving, and their plans are ever more cunning. Suddenly her friends are dying. Safety can no longer be taken for granted – not even for the watchers. At least she has Kenzie. Love is a strong word, but whatever they have, it’s what keeps her going.

Embarking on a desperate mission to save humanity from extinction, Sawyer discovers that the line between friend and foe is no longer easily drawn when one of her own betrays them.

And when a horrific plan comes to fruition, Sawyer will have a choice: who to save, and who to let go.

Divergent meets Terminator in this epic YA trilogy. Get it today.