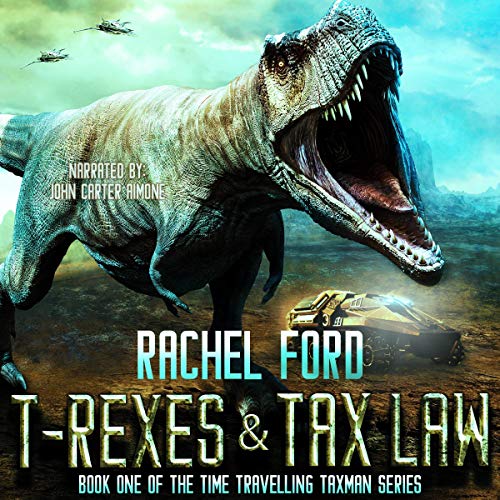 The title of this book was what drew me to it! I’m a big fan of book with dinosaurs but couldn’t figure what it had to do with tax but it quickly became apparent when I started to listen.

Senior analyst for the IRS, Alfred Favero, is sent to investigate a big company who is suspected of fraud. His reluctant companion is Nancy who is barely able to stand Alfred’s’ pompous attitude. When they arrive at the compound they find the place to be abandoned, and it looks like it’s been abandoned for years. They enter a room and Alfred pushes a big red button which causes both of their lives to change forever!! Alfred and Nancy are transported millions of years into the past with no way home. they eventually find the missing people but they also find themselves embattled in a mystery that needs to be unraveled.

While the plot sounds ridiculous, it actually works extremely well! Who knew that the IRS would stumble upon such a mystery!! Lol. I do wish there was more dinosaur action though, there was one scene where it became very tense, but I wanted more. I did love the mystery intertwined with the time travelling plot though and couldn’t listen to it fast enough in order to find out what happened.

But the absolute best thing about this book was Alfred. He is so sure of himself and his work, he follows the rules to the letter and is almost pompous in his attitude, but he is a lovable pompous and I immediately liked him. He reminded me a bit of Sheldon from The Big Bang Theory in a way, though he isn’t geeky at all!! I also loved his interactions with Nancy. You can feel her exasperation with him but she gets Alfred to take a long look at himself when she reveals some truths to him. That’s when he stars growing as a character and that’s when he and Nancy become friends.

In all, this was a fun read, with plenty of laugh out loud moments… most of them from or about Alfred!! I’m intrigued to see what else Alfred gets up to and am so glad I have the second one to listen to right away!!

While I loved the story, I’m quiet torn with the narration. On one hand John Carter Aimone made for an awesome Alfred but on the other, he just read the story too slowly. It took me ages to get into because it sounded so boring and I ended up having to start again from the start and speed up the narration in order to finish it. Once I found a speed I felt comfortable with, I did end up liking his narration. He had plenty of tones and voices and put emotion behind his performance, which made it all the more fun with Alfred!!

He shouldn’t have pushed the button. But Alfred Favero, senior analyst with the IRS, pushed the button. And now he’s 67 million years in the past, stranded out of time with a coworker who hates him and a bunch of tax cheats. Oh, and then there’s the other inhabitants of his prehistoric home: the dinosaurs that want to make a meal of him. Things couldn’t get worse.

Until a mysterious visitor from an uncertain future shows up with murder on his mind.