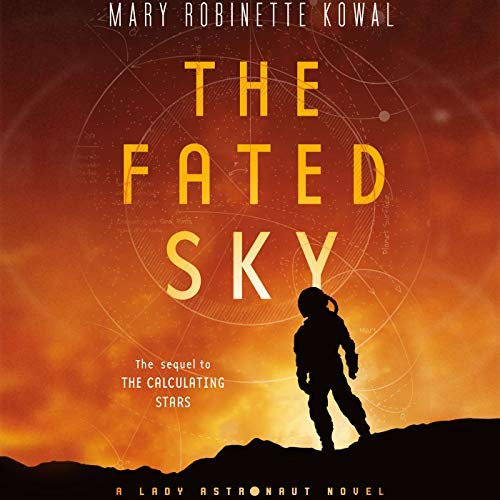 A Great Conclusion to the Lady Astronaut Series

In The Fated Sky: A Lady Astronaut Novel, Mary Robinette Kowal returns as both author and narrator, bringing us the next chapter of Elma York’s story. If you enjoyed the first book of this duology (The Calculating Stars), you will certainly not be disappointed by its sequel. Kowal once again expertly combines the genres of science fiction and historical fiction to draw listeners back into Elma’s world, an alternate version of the 1960’s, where warming oceans are causing catastrophic changes.

Having successfully completed her first mission, Elma has returned to Earth and is learning to manage the challenges associated with her “lady astronaut” fame while she and other survivors of the meteorite struggle to adapt to their new reality and prepare for the impending climate challenges. When the International Aerospace Coalition begins to plan an exploratory mission to Mars, Elma, who recently handled a crisis/hostage situation with grace and courage, is thrust back into the spotlight and offered a position aboard the ship. She grapples with the decision–it’s literally the opportunity of a lifetime–but the sacrifices would be tremendous. Participating would l mean spending years away from her husband, brother, and nephew, forgoing the opportunity to have children of her own, and potentially taking the spot of a well-trained, dedicated, and committed fellow astronaut.

The Fated Sky revisits themes of racism and sexism, highlights the concept of implicit bias, questions the decision making in disaster relief plans and distribution of resources, and contemplates the multitude of sacrifices one might make when deploying in service to their country. Stetson Parker returns, snarky as always, but Kowal introduces a new side of this character, developing him in a way that forces reader’s to empathize with him while we explore themes of grief and loss. The science seems well done and the overarching conflict drives the plot along–will they make it to Mars and save the world? Kowal’s ability to create a world so similar to our’s while maintaining some distance in an obviously alternate reality allows readers to think about these complicated issues in a way that might not otherwise be possible.

Overall, the Fated Sky was a great conclusion to the Lady Astronaut story. The characters are likable (except for when they aren’t supposed to be), the conflict-driven plot is interesting, and the themes are thought-provoking. Kowal’s writing and narration were both phenomenal as always and have me wondering which of her stories I should add to my library next.

Mary Robinette Kowal continues the grand sweep of alternate history begun in The Calculating Stars. The Fated Sky looks forward to 1961, when mankind is well established on the moon and looking forward to its next step: journeying to, and eventually colonizing, Mars.

Of course the noted Lady Astronaut Elma York would like to go, but there’s a lot riding on whoever the International Aerospace Coalition decides to send on this historic - but potentially very dangerous - mission. Could Elma really leave behind her husband and the chance to start a family to spend several years traveling to Mars? And with the civil rights movement taking hold all over Earth, will the astronaut pool ever be allowed to catch up, and will these brave men and women of all races be treated equitably when they get there?

This gripping look at the real conflicts behind a fantastical space race will put a new spin on our visions of what might have been.

Audiobook: The Calculating Stars by Mary