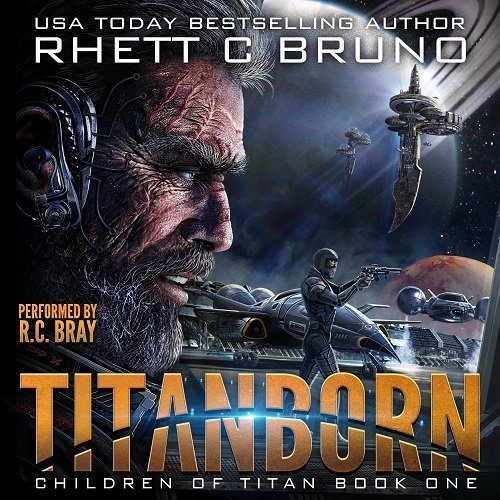 Titanborn was a solid read, though it did take me quite a while to become fully invested in it. The first half of the book is quite slow but I put that down to building the world and characters so I didn’t mind too much.

The plot was slow to start and I was a little bored at times, but it eventually picked up and I ended up really enjoying it. I love that the book takes us from Earth to Mars and even near to Saturn where Titan is. The world as we know it is completely different and Bruno did a good job with creating such an expansive universe.

Upon seeing the cover I think I expected more of a space opera type of book, but it’s not really, it’s more focused on the Bounty Hunter and the mystery behind the bombings, which I enjoyed.

The characters were well written and developed and I pretty much enjoyed it as much as I did because of them. They more than made up for the slow pace. Malcolm was gruff, strong, and did his job really well. He let no one or nothing influence him. He is seen as one of the best in the business and usually works alone. When he’s asked to look into the recent bombings, he is told that he will have a partner. Zhaff was the total opposite of Malcolm and I loved that! It was funny to see them interact and to see how Malcolm reacted to Zhaff. I loved both their characters!

In all, Titanborn, while being slow to get going, was still a pretty good read. The world building and character development more than made up for the pacing and I’m hoping now that that’s done, the rest of the books will have more action. Upon finishing it, (because the ending was awesome) I had to see if the next one was available because I’m excited to see where the author goes with it.

R.C. Bray is one of the best in the business. His array of voices and tones are astounding and he never just reads a story, he performs it. A true storytelling master. It’s hard to come up with new things to say about him but he really is that good!

Offworlders are only worth the price on their heads.

After three decades as a Pervenio Corporation Collector, chasing wanted offworlders and extinguishing protests throughout the solar system, Malcolm Graves doesn’t bother asking questions. So long as the pay is right, he’s the man for the job. But his latest assignment doesn't afford him that luxury.

A high-profile bombing on Earth has the men who sign Malcolm's paychecks clamoring for answers. They force him to team up with a strange, augmented partner who's more interested in statistics than instinct, and ship them both off to Titan to hunt down a suspected group of extremists: Titanborn rebels who will go to any length to free their home from the tyranny of Earth’s corporations.

Heading into hostile territory, Malcolm will have to use everything he's learned to stay alive. But he soon realizes the situation on the ground is much more complex than he anticipated...and much more personal.

Check out the thrilling first book in a gritty and innovative science-fiction series perfect for fans of The Expanse and Blade Runner.