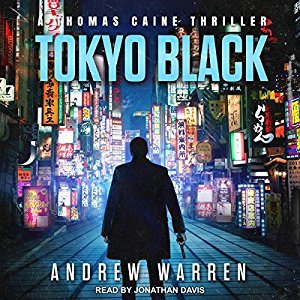 A movie-like thriller full of detail

You can usually tell when an author throws a book together without doing his or her research.  And then you can tell when someone really has a passion for something or someplace.  You can tell that Warren has a passion for writing a well thought out and detailed thriller and that he loves Japan and Japanese culture (the good and the bad).

Tokyo Black is a look into the deep and dark world of a gang that is filled with ex-Yakuza members who believe that the Yakuza has lost their ways and that they need to start over again.  To join, you just need to have your Yakuza tattoo’s removed in the most painful ways imaginable.  If you can survive the pain — you may join.  And what do they call themselves? Tokyo Black.  Thomas Caine is thrown into the middle of this as he searches for a CIA asset’s missing daughter.

The story itself was really detailed.  As I wrote about, I could really tell that Warren either spent time in and around Tokyo or spent a lot of time researching their cultures, traditions, and landmarks.  At first I felt like I was being dropped into a series mid-run, but after a little while Warren started to explain who Caine was and why we were following him.  It took a little while to get there, but once the story did, it picked up the pace and really moved towards the end.

Thomas Caine is one of those ‘I like you but I don’t like you’ kind of main characters.  He has one of those personalities that I could have really hated, but he grew on me.

The story itself was really interesting, but a little too detail oriented.  I enjoy the details but sometimes it just felt like it dragged on a little too much.  As I mentioned above, the story did pick up about a third of the way in and did continue at a pretty good pace from there one.  But getting through the first third was harder than I usually like.

Overall though, Tokyo Black was one of those thrillers for people who like detail-written plots with really researched topics, great character development, and a nice medium-to-fast paced story.

The narration was done by Jonathan Davis, who I thought did a pretty good job.  I’ve never had any issues with any of my Tantor Audio books — and this one was no different.  Perfectly edited with good pacing and great sound quality.

A burned spy must stop a deadly cult from igniting global conflict...

Thomas Caine lives in the shadows.

Betrayed and left for dead, he has put his past as a government assassin behind him. Now he lives off the grid, in the seedy underworld of Pattaya, Thailand. But when local gangsters set him up for a crime he didn't commit, his old CIA masters make him an offer he can't refuse: rot in a hellish Thai prison, or accept a dangerous mission in Tokyo, Japan.

As he hunts the neon-lit city for a CIA asset's missing daughter, he quickly learns there is more to his assignment than meets the eye. Looming in the shadows is Tokyo Black; a right wing terrorist cult, whose members demonstrate their loyalty by burning their yakuza tattoos from their skin. Can Thomas Caine defeat this fanatical enemy, before they ignite an international conflict that kills thousands?

Andrew Warren was born in New Jersey, and studied film, English, and psychology at the University of Miami. He has over a decade of experience in the television and motion picture industry, where he has worked as a post production supervisor, story producer, and writer. He currently lives in Southern California.

One thought on “Audiobook: Tokyo Black by Andrew Warren (Narrated by Jonathan Davis)”