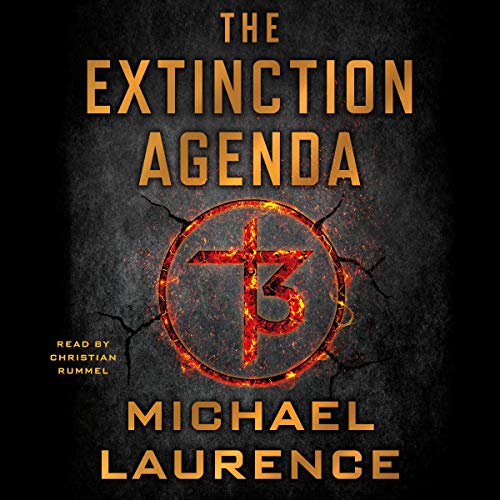 Well That Was Great

I’ve been thinking about the audio version of this book for some time.  My friend and fellow blogger Michael Patrick Hicks reviewed this book back in mid-July (see his review here). I actually did have an ARC of this book and I ended up being that guy and I waited for the audio to come out.  I’m glad I did because Christian Rummel did a fantastic job narrating this.

The Extinction Agenda is a thriller but it doesn’t follow all of the typical thriller tropes.  Sure, FBI Special Agent James Mason has some of the typical traits – this book reads a little different. The main plot is Mason’s unrelenting attempt to thwart seemingly an unending force of people trying to cause a massive die-off of the worlds population.

It reads like a bio-thriller at times and an action-packed military thriller at others.  Throw in some modern detective and technothriller vibes and you start to scratch the surface of this book.

I absolutely flew through this book and I couldn’t believe it when it was over.  The last 2 hours I found myself checking and rechecking to see how close to the end I was.  Not because I couldn’t wait for it to be over, but more because I didn’t know how he was going to wrap everything up in the final moments.

I needed a book like this in my life and boy am I glad that this one came along.  The Extinction Agenda is a story I won’t soon forget and I cannot wait for more stories in this series.

An FBI agent fights to stop a conspiracy to unleash a deadly virus on the world in this propulsive, exhilarating new thriller.

The discovery of a deadly virus being smuggled across the border pits FBI Special Agent James Mason and his strike force against an unknown adversary hell-bent on humanity’s destruction. In a desperate effort to contain the pathogen, they launch a predawn raid, only to find that their enemy knows they’re coming...and it’s not about to be taken alive. An explosion rips through the building, killing the majority of Mason’s team, including his partner and mentor.

Tormented by guilt, Mason returns to his home division, but he can’t seem to let go of the tragedy. He remembers seeing something inside the building before it went up in flames, something that convinces him that not only is the virus still out there, it’s merely the first stage of an even more nefarious plan. Obsessed with unraveling the plot, he launches his own investigation and uncovers a shadow organization on the brink of enacting its genocidal agenda, one carried out by a sinister mass murderer who’s been photographed at the epicenter of seemingly every historical pandemic...without appearing to age. An evil man who attempts to derail Mason’s investigation by murdering his wife.

With the help of his longtime friends - Gunnar Backstrom, a corporate espionage gun-for-hire, and Ramses Donovan, a sin merchant of questionable morality - Mason’s hunt for his wife’s killer leads him from a dark union at the dawn of the 20th century to a network of Nazi collaborators and a conspiracy against mankind more than a hundred years in the making. Fueled by anger and driven by the promise of vengeance, he must overcome a monster preparing to unleash his virulent wrath upon an unsuspecting world if he’s to have any hope of exposing a deep-state entity that’s rooted in every facet of our society, an entity known only as...The Thirteen.

Audiobook: Federal Undergroun by Jeff Be