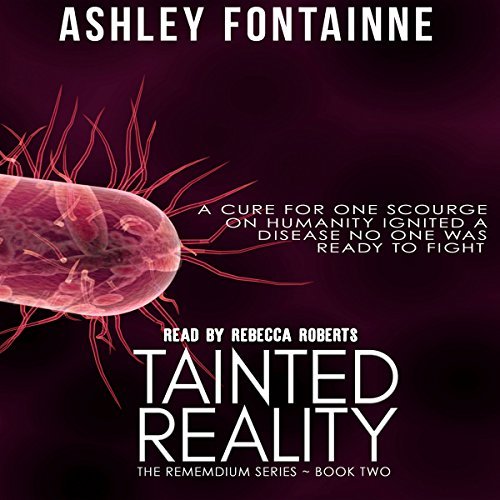 Ashley Fontainne is back with another Rememdium Series book.  Tainted Reality picks up where Tainted Cure leaves off. Follow different groups of people as they try to survive this incredibly virulent zombie apocalypse that is taking over the world.

The narration for Tainted Reality was done by Rebecca Roberts (who also narrated Tainted Cure).  And Roberts does a perfect job again.  She is able to lend her voice so perfectly to some of the main characters in this story — making the listener feel like they are actually listening to people tell their story.  Rebecca Roberts will definitely be on my radar when I’m looking to buy my next audiobook.

Tainted Reality has a lot of blood and gore in it, almost too much.  Almost.  The reality of the situation lends itself to being as gory and bloody as this is written.  I enjoyed the deep and disgusting descriptions of the different deaths and attacks.  It really made this book feel real.

I absolutely love Regina Parker. She might be one of my favorite post-apocalyptic/zombie survival characters ever.  She’s a total BA all while still remaining a sweetheart who is still trusting.

I’m not really sure how many more Rememdium books that Fontainne plans on writing, but I am all-in now.  I need to know what happens to these characters.  I want more!

Overall, Tainted Reality was another wonderfully written and narrated story by Fontainne and Roberts.  Keep it up, and you will have a fan for life.

Dr. Everett Berning achieved his life’s work by discovering a cure for drug addiction. Unfortunately, the formula was stolen and fell into the hands of the enemy.

Drug lords from around the world unknowingly released the altered, deadly formula into their supply, affecting millions across the globe.

Within 48 hours the entire planet was thrown into chaos as the disease spread.

Regina Parker, chief of police of the tiny town of Rockport, Arkansas, isn’t willing to let the military kill thousands of innocent people in a rush to contain the outbreak. She leads a small contingent of survivors on a dangerous quest to keep her town safe from the soldiers and the dead.

Will Dr. Berning be able to isolate the contagion and find a way to reverse it, or is it too late to save humanity from the tainted cure? How far will Chief Parker go to save the lives of others as the world collapses around them?