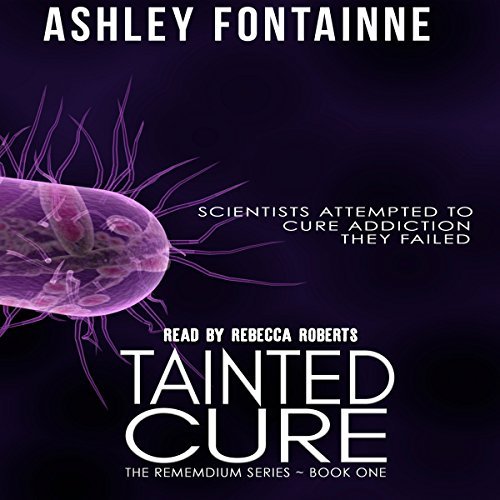 Not all cures are created the same

The narration for Tainted Cure was done by Rebecca Roberts. This was my first book narrated by Roberts, and she does a phenomenal job. She gives each character a slightly different voice, making the story easy to follow. The key to a good audiobook is either making the characters come alive or reading it in such a way that the reader feels like they have gained something over reading it themselves. Roberts is able to capture both. My only complaint about the audiobook (and it has nothing to do with the narrator) — is that in the real book, you can probably tell when it is switching characters. In the audiobook, there is no way of knowing it switched without actually realizing that another person that wasn’t in the one scene is now talking.

The plot for this was different than most of the zombie-type books that I read. Sure, there have been other books and movies that had a similar start (I Am Legend on the movie side is a cure for something gone wrong, and Feed by Mira Grant is about a combination of two cures that weren’t tested together). But, Tainted Cure was unique in that it was a cure for something that had no ill-effects until it was tampered with by others outside of the research lab.

The story flows really well, starting off I wasn’t really sure where the “tainted” part of the title was going to play in, and I spend the majority of the first half of the book guessing (incorrectly) what was going to go wrong.

The characters were well explained and the story followed their struggles along with their successes. My only complaint is that the story just ends. Yes, I’m fine with cliffhangers, but this felt almost like it was chopped right here to make the second book. Some of the characters completed their own arcs, but the actual story arc was between halfway and two-thirds complete. It worked, though, because now I’m going to be looking for the second story (which I believe is already completed in audiobook).

The team of Fontainne and Roberts really helped bring this story out. Roberts helped the story come alive, so I recommend listening to this if you have the chance.

Scientists attempted to find a cure for addiction. They failed.

Dr. Everett Berning, a leading researcher into the causes of addiction in the brain, spent 10 years of his life dedicated to one thing: finding the cure. Recruited after a strange encounter with the enigmatic Dr. Roberta Flint, director of research on Code Name: Rememdium, Dr. Berning is sent to work in a secret lab as part of the research team.

When the moment the scientists waited on for years arrives, Dr. Flint and her team are ecstatic.

Unfortunately, not everyone in the world feels the same way.

Benito San Nicholas isn’t ready to give up his lucrative business. When the news of a cure arrives on his doorstep from a crooked informant, Benito enlists the help of other drug lords from around the world to stop the cure from hitting the streets and destroying their livelihoods.

What happens next ends up uniting the globe – just not the way society ever intended or hoped.