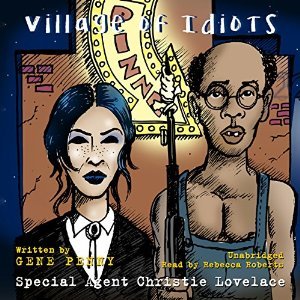 This Monday was supposed to be like any other Monday, but it quickly spirals out of control.  Meet Christie Lovelace, a self-depreciating FBI agent who gets a case that begins to open up what appears to be Pandora’s Box.

This book does contain some graphic language.  Readers/Listeners who are easily upset by language should be warned.

Special Agent Christie Lovelace: Village of Idiots was narrated by Rebecca Roberts who does a perfect job.  The character Christie Lovelace has a really unique point of view and way of talking, which Roberts knocks out of the park.  She has a kind of “I’m so done with this” attitude throughout and Roberts nails if perfectly.

Village of Idiots was an interesting book.  While not my normal type of book, I found myself really enjoying it.  The uniqueness of Lovelace’s point of view made me laugh again and again.

The story was interesting and continued to get more and more interesting as it progressed.  Lovelace is faced with basically the worst day of her life and it just keeps getting worse (and weirded).  It kind of feels bad to laugh out loud at the things that continued to happen to her, but they were written in such a way that it kept me laughing again and again.

Overall, while not a story that I would normally read, I definitely enjoyed Special Agent Christie Lovelace: Village of Idiots.  Honestly, I don’t think I would have picked this book up if Rebecca Roberts hadn’t narrated it, but her performance made this book for me.  Roberts fans — if you are on the fence about this book, pick it up and enjoy a good laugh.  I promise you won’t regret it.

I was given a copy of this audiobook in exchange for an honest and unbiased opinion.

Christie Lovelace is sent to investigate an anonymous tip linking the death of a nameless woman to allegations of corruption in the small town of Danbury, Texas.

In the course of Christie’s roller-coaster investigation, she is blindsided by unexpected news from her boyfriend Kieran, financially accosted by a strange motel owner named Otto, and forced to endure the curiously strong smell of feces wafting throughout the sheriff’s station.

Special Agent Christie Lovelace: Village of Idiots is oddly befitting of a Monday – a day that starts off on the wrong foot and spirals into the most bizarre mystery of Christie’s career.