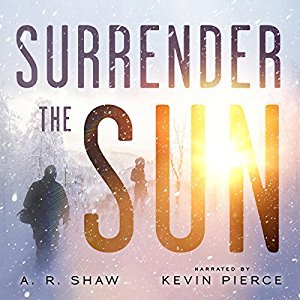 A new ice age is setting in, completely to the bewilderment of meteorologists and people alike.  A mother and a son are stuck in their house when the temperatures start to drop.  Utterly unprepared and quickly realizing that they can’t rely on others, they are soon in trouble. A “hermit” who happens to be a veteran and know her husband takes to watching over and protecting the family from others and themselves.

Kevin Pierce is a masterful narrator. Especially for stories like this.  Every time I listen to a Post-Apocalyptic/Prepper audiobook and he’s not narrating it I’m always craving it a little.  His voice just lends itself so well to these types of stories.

The opening of the book really got me right away.  I love post-apocalyptic novels, but something you might not know as much is that I really enjoy the weather and weather related topics.  Extreme weather just fascinates me.  It’s absolute force and ability to turn things from good to bad in seconds just keep me in awe. So, when I saw that there was a book that combined these two forces, I was pretty pumped.

I believe that the story took place in Idaho, and I have zero idea what their winters are like. But, I’m from Buffalo. So when I hear the way that temperature was talked about I did shake my head a few times.  I definitely know what cold feels like, and some of the temperatures that were mentioned in the early parts of the book weren’t as cold as they were being shown.  BUT, if you weren’t used to that kind of cold, or it came on suddenly (which is seemed to do in Surrender the Sun) then I give it some leeway.

The wife and son combo were so likable, and the character who was watching over them was perfect. Sometimes a character is just written perfectly and you can picture them right from the start.  I feel like all three of them were written this way.  It just felt so real and believable.

Overall, Surrender The Sun was a different take in the post-apocalyptic/prepper genre.  Sure there were some typical moments and bad guys, but the whole reasoning for the apocalypse was unique and a nice refresher in the genre.

A.R. Shaw definitely knows how to write, and write things that are incredibly researched.  Everything in Surrender the Sun felt so plausible it was terrifying.

It's happened once before, and it will happen again.

In the year 2030 the Maunder Minimum, a period of solar inactivity, will cause a mini-ice age like it did between the years 1645 and 1710. When it does, Bishop will have to save her not only from the effects of severe weather but also from man himself.

Maeve Tildon and her son Ben live alone in the rural town of Coeur d'Alene, Idaho. Since her husband died in the war, she's barely kept her head above water, and when the first freeze strikes in the fall, she's completely unprepared for what lies ahead. Only a war-torn man, one who prefers the solitude of the Kootenai National Forest, can rescue her and her son.

From the best-selling author of the Graham's Resolution series, Shaw brings you Surrender the Sun.

Also by this author: Sanctuary

It’s rare for a new author to pull a favorable Kirkus Review with a debut novel, but that’s just what A. R. Shaw did with The China Pandemic; the first book in the Graham’s Resolution series. Not only that, it hit number one in both Post-Apocalyptic and Dystopian genres in May of 2014. Not bad for a Texas girl and former Radio Operator, who served in the Air Force Reserves.

Since then, she’s written three more novels in the popular Graham’s Resolution series, two Kindle World’s Novellas in the Perseid Collapse world as well as an addition to the popular Wayward Pines Kindle World, Kate’s Redemption.

In the works now is a mystery novel and a new post-apocalyptic series, Surrender the Sun, as well as surprise additions to the Graham’s Resolution series.

She was stunned by the love of her fans for the fictional dog, Sheriff, from the Graham’s Resolution series who now has his own Facebook Page run by fans titled Sheriff’s K-9 Squad Room. It’s a page to share all things regarding police dogs. She’s been repeatedly warned, by the fans, never to consider axing the dog; the children are fair game, but the dog stays. Perhaps that’s a tribute to her unique ability to write stories that make readers really care about the characters she develops.

For now, A. R. Shaw lives with her family in eastern Washington State, but she may soon flee to the hills of Idaho perhaps to some quiet cabin in the woods.