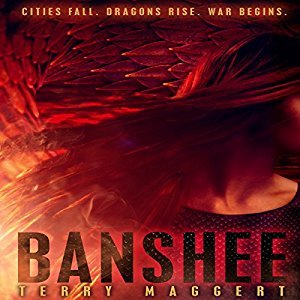 A different spin on Post-Apocalyptic Books

The narration for this is interesting.  I won’t say bad because I’ve heard bad narration before.  But the performance was great at times and left something to be wanted at others.  Henry McNulty has a deep and harrowing voice which works for parts of this, but for others, it just felt too deep and dark.  The production quality was great, though.  I didn’t notice any issues.

When I first saw this book, I had my doubts.  I’m not a huge fantasy fan.  Honestly, I usually dislike it (other than player Elder Scrolls, and even then I barely use magic). When I was reading the description of the book, I had one thought.  This is different.  Different can be good, and different can be really bad. But, Banshee was kind of in the middle.

Sure, this is a post-apocalyptic book.  But it’s also a fantasy book with dragons in it.  And not “these things were mutated from x-and-y” dragons.  But real, “I must believe in you” dragons.  My inner voice had a really hard time with this.  But, if you enjoy that sort of thing then this review is not for you, but I’d bet this book is.

As a post-apocalyptic book, it was pretty good.  I would give it a 4 out of 5 just based solely on that.  As a fantasy book, I don’t even know how to rate it.  It’s just not my genre.

Maggert’s style of writing is real… proper.  It made this book feel a little long winded at times.  But overall, the dark and ominous tone mixed with the language used left me wanting a little more.  Readers who are looking for “real” post-apocalyptic descriptions and reactions will be a little disappointed.

I’m not usually one to point out the shortcomings of novels, but I just had to warn people that are looking at this from a purely P-A standpoint, you might want to move on.  If you enjoy dragons and post-apocalyptic novels, then this book is definitely for you.

Cities Fall. Dragons Rise. War Begins.The war for earth began in Hell. First came the earthquakes. Then came the floods. Finally, from the darkened mines, caves and pits, the creatures of our nightmares boiled forth to sweep across the planet in a wave of death.Mankind, on the run and unprepared, is not alone. We have dragons.Emerging from their slumber, giant dragons select riders to go to war. Their forces strike back at the legions of demons that attack on the night of every new moon. The Killing Moon, as it becomes known, is the proving ground for warriors of skill and heart. Among the riders is Saavin, a brave young woman from the shattered remains of Texas. Her dragon, Banshee, is swift and fearless, but they will need help to fight a trio of monstrous creatures that Hell is using to take cities one by one.With the help of French Heavener, a warrior of noble intent, Banshee and Saavin will launch a desperate defense of New Madrid, the last city standing. But first, they’ll have to go into the very cave where demons bide their time until the sun fades and the moon is black.The hope of mankind rests on dragon’s wings and the bravery of Saavin and French. They have the guts. They have the guns. They have dragons.