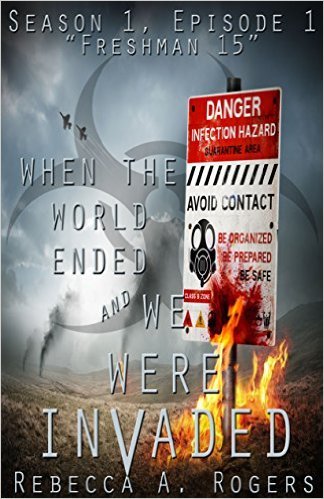 Follow three sets of people as they realize that things are about to get bad fast.

Freshman 15 is Episode One of the When the World Ended and We Were Invaded Season.

Follow three sets of characters as they are thrown into the fire that is a zombie apocalypse.  This is just the beginning.

There are three sets of main characters in this story.  Ella and Shay, who are brand spankin’ new college freshmen just meeting each other (brand new college roommates) when they realize that something is going on down in the quad.  It started out as horseplay, even some flirting, but now it is so much worse.  These two characters were my favorite of the three sets introduced in the first episode.

Then, you meet Matt and his little brother Devin.  This is easily the most depressing story of the three and by far carries the most emotion.  That being said — Rogers was able to bring feelings out of me in under 50 pages, which is pretty awesome.

Finally, there is Lin.  I’m not sure what we’re supposed to feel for Lin, but he was my least favorite.  Maybe he will grow on me in the upcoming episodes.

I wasn’t even sure I was going to leave a review for this on here since it’s so short.  But I found myself really enjoying it.  And the author was smart and made episodes 1 and 2 free so that she gets you hooked and then you’re on the hook for the rest of the season.

Overall, this was a really good start to what could be really good series. I’m definitely intrigued and I will be continuing until I feel like I’m not getting my money worth.

Ella and Shay witness more than enough carnage on their first day of college. Matt and his little brother, Devin, are attacked at the grocery store. Lin locks himself inside the pub where he was supposed to perform after watching the pub’s owner get eaten. 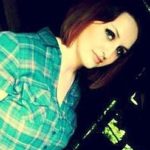 Rebecca Rogers expressed her creative side at an early age and hasn’t stopped since. She won’t hesitate to tell you that she lives inside her imagination, and it’s better than reality.