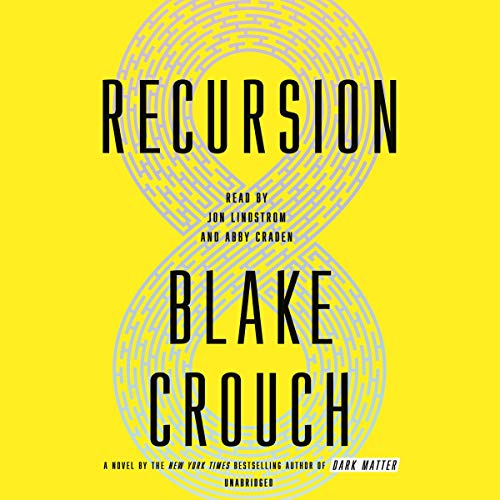 Well Then, That Was Enjoyable

Believe it or not, this is my first Crouch book.  I’ve had some of his other books on my radar but never took the dive. But, after a couple of friends recommended this – I figured it was worth a shot. (hint, they were right it was!)

Recursion mainly follows two main characters – Barry, a New York City cop and Helena, a brilliant scientist. It all starts when Barry starts to look into a new phenomenon known as False Memory Syndrome.  What he doesn’t know is that his curiosity into FMS will lead him into an insane time warping world that he may never get out of.

Recursion is one of those books that is hard to review because of the amount of twists and turns – I want to write about certain things but they’ll all be spoilers. Crouch did a great job writing the synopsis as to not give any of the major plot points away – but that means that I can’t write anything about the plot/description without spoiling it.

I really enjoyed this book.  It was fast paced and really flowed well. Especially because there was a lot of jumping around.  Crouch did a good job explaining where, who, and what was going on while also not spending eons on details.  He was able to describe complex situations in mere sentences and allowed the story to just flow from beginning to end.

There wasn’t a single point in Recursion that I thought “oh that’s bloat” or “that was too much info”.  It’s a practice in precision scenes that really get the point across.

My only complaint was that I seemed to have some issues with the sound. The story was told pretty slow by the narrators (I rarely comment on this, but this one dragged more than usual for me). Also, it had some sound issues that I can’t put my finger on but I’ll say that it surprised me from a Random House production. Both narrators (whom I’d never listened to before this) were okay. They weren’t bad or great – but just okay. They didn’t use inflection as much as I’m used to and there were some really dramatic scenes that could have been played up just a bit.

Overall, Recursion was a blast of a book.  If you enjoy books that mess with your brain in the way that they mess with time and space – Recursion is for you.

Memory makes reality. That’s what New York City cop Barry Sutton is learning as he investigates the devastating phenomenon the media has dubbed False Memory Syndrome - a mysterious affliction that drives its victims mad with memories of a life they never lived.

Neuroscientist Helena Smith already understands the power of memory. It’s why she’s dedicated her life to creating a technology that will let us preserve our most precious moments of our pasts. If she succeeds, anyone will be able to re-experience a first kiss, the birth of a child, the final moment with a dying parent. As Barry searches for the truth, he comes face-to-face with an opponent more terrifying than any disease - a force that attacks not just our minds but the very fabric of the past. And as its effects begin to unmake the world as we know it, only he and Helena, working together, will stand a chance at defeating it.

But how can they make a stand when reality itself is shifting and crumbling all around them?

The Messengers by Lindsay Joelle (Narrat