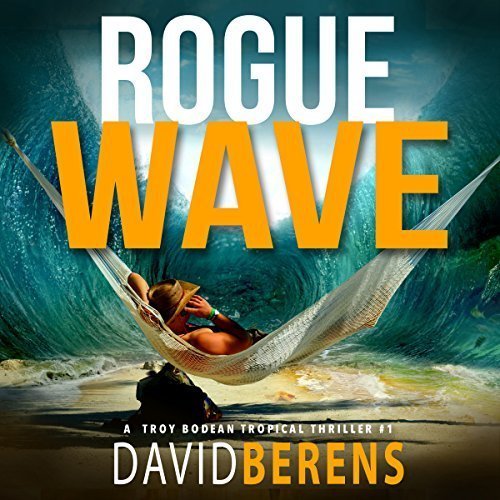 A Fun and Funny Lighthearted Mystery

Right away this story had the feeling of the “fun” and lighthearted mystery books I’ve read in the Fletch series.  It’s still really early into the Troy Bodean series for me – but I can tell that he doesn’t take too much too serious.  I don’t think it’ll ever be as funny or timeless as Fletch, but it’s definitely in the same vein.

Rogue Wave tells the story about Troy, a former military man home from war (Afghanistan, I believe) who is just trying to get by when things start to happen around him.  He meets a gorgeous, but much younger than him girl, he finds a sweet hat, but only after be loses his fishing pole.  And once things feel like they’re going well it seems that all hell breaks loose.

The book, as I said above was lighthearted and pretty harmless with minimal swearing.  There was a lot of blood and gore (more than I would have honestly expected). And to be honest some of it felt overused and other points felt… over the top.  I get that one of the main baddies was a brutishly large man – but I don’t think you can rip someone’s fingers off by just snatching a gun out of their hand. Along the same line – slamming a door on someone’s middle finger, unless it’s a metal door probably won’t sheer someone’s finger off (I say probably because I’m sure anything is possible).

I’m all for suspending my disbelief (I call it my movie/book goggles) but there were a few other scenes that just got to me that Berens or an editor didn’t catch.  One of them was when they were out really late (the bar was about to close kind of late) and he decided he needed to stop at Starbucks on his way to the hospital. Now, much to my wife’s chagrin while she was in grad school – Starbucks isn’t open late.  There were a few other just simple things that could have been avoided that got to me (and had me take a star away in my review).

Overall, I thought that Rogue Wave was an enjoyable story that I ended up really flying through.  Sure, it had some inaccuracies and some details that just felt a little off, but it was still fun and enjoyable. I’m intrigued by the other books in the series and will probably check them out soon.

Back from his tour in Afghanistan, Troy Clint Bodean had everything he needed for some peace and quiet: a good fishing pole, a pickup truck, and a beach house on a small island in South Carolina. All was right with the world - until he found the hat. It was a straw cowboy hat with a peacock feather stuck in the band and it looked good on him, really good. That's when everyone started trying to kill him, and he had no idea why. Hold on to your hat! Suspenseful, gripping, and fast-paced, Hat Check - the first Troy Bodean Adventure - follows Troy trying desperately to stay alive and figure out why everyone is out to get him. Readers of Carl Hiaasen, Randy Wayne White, and Tim Dorsey will love the island feel and snappy humor of Hat Check.