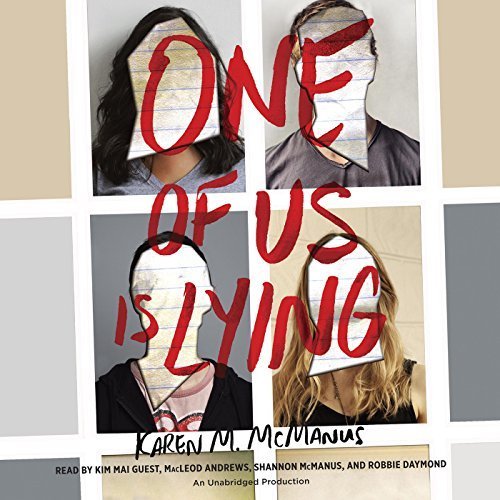 This is a high school mystery filled with guilt, heart and is complete with so many dirty little secrets. I could not stop listening to this story once I started. I gobbled it up rather quickly.

It’s one part fun, many parts drama and at times very scary. I have come to really enjoy the young adult genre and after being out of high school for some time now I believe this story has the characters with just enough sass, vulnerability and minimum life experience to be realistic.

One of Us is Lying was written with multiple POV and gives different vantage points of the story. I really liked this as it was performed by a full cast giving the character’s all distinct voices. The characters are sneaky and this book proves that you never know what goes on behind closed doors. There are definitely stereotypes throughout the book, but that is expected because whose high school didn’t have them?

At times the plot does feel like it has been done before but then out come the underlying teenage themes of the pressure to succeed, wanting to be liked and a whole lot of self-reflection. Let’s not even mention the mystery that I was endlessly trying to figure out.

The narration was just amazing and I could not pick a favorite performance if I tried. The Southern-accented Cooper or the soft-spoken Addy, hard-nosed Nate or last but certainly not least sophisticated Bronwyn each bring distinct flavor to this story. Each has moments of anger, sadness, and happiness which each narrator captures perfectly. A great listening experience. 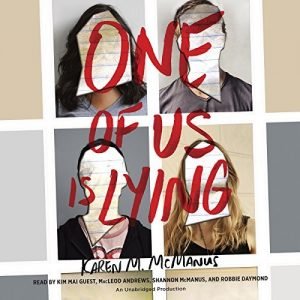 The Breakfast Club meets Pretty Little Liars. One of Us Is Lying is the story of what happens when five strangers walk into detention and only four walk out alive. Everyone is a suspect, and everyone has something to hide.

Bronwyn, the brain, is Yale-bound and never breaks a rule.

Addy, the beauty, is the picture-perfect homecoming princess.

Nate, the criminal, is already on probation for dealing.

Cooper, the athlete, is the all-star baseball pitcher.

And Simon, the outcast, is the creator of Bayview High’s notorious gossip app.

Only Simon never makes it out of that classroom. Before the end of detention, Simon’s dead. And according to investigators, his death wasn’t an accident. On Monday he died. But on Tuesday he’d planned to post juicy reveals about all four of his high-profile classmates, which makes all four of them suspects in his murder. Or are they the perfect patsies for a killer who’s still on the loose?

Everyone has secrets, right? What really matters is how far you would go to protect them.

Buy from Audible
Also by this author: Two Can Keep a Secret

One thought on “One of Us is Lying by Karen M. McManus (Narrated by a full cast)”