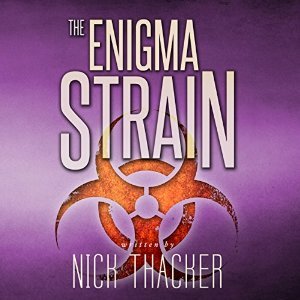 A gripping bio-thriller that has Crichton written all over it

Harvey “Ben” Bennett is a park ranger at Yellowstone National Park.  While out on a seemingly routine re-home of a bear that got a little too close for comfort, a bomb goes off in the park, killing his partner on the job.  Bennett is soon thrust into an ongoing investigation into a new “bug” that is causing massive boils and rashes to form and quickly spread across its victims.  He joins forces with CDC investigator Juliette Richardson as they try to figure out what is going on in Yellowstone and what is causing people to break out into these rashes, and then die.

Enigma Strain was narrated by Mike Vendetti.  I wasn’t sure if I was going to like his narration at first, but he quickly grew on me.  Vendetti has a natural machismo that I think Bennett’s character would have (maybe slightly more subtly).  Vendetti seems to be a master at his craft and allowed for the quick pacing of this book to just flow off of his tongue.

With that being said, I love a good bio-thriller.  Anything where they dive deep into what the virus, or bacteria, or what-have-you and does it justice is usually a high rater in my book.  Engima Stain just cruised up into 5 stars, the background of the disease was super interesting and I haven’t read too many books that were about a similar idea.

The first thing I did when I finished this book was call up my dad and tell him I had just gifted him a copy for his Kindle.  He’s a fast-paced thriller fan, and I knew that he was going to love this.  Bennett’s character was just, interesting.  I found myself spending time trying to figure him out, what makes him tick, why is he afraid of flying “he just doesn’t like it.”

The relationship between Ben and Juliette was a nice addition for me, it didn’t feel forced or unnatural at all.  Their characters, while seemingly quiet and stand-offish, were better when they were together.

There were some twists in this that I didn’t expect, and when a book can do that, I’m always impressed.  The relationships (both growth and history) were really nice additions without making this book super long.

Overall, Thacker has done it again.  Blending the pacing and science of Crichton with his own unique twists, this book is sure to please many fans over many genres.

I honestly think that was the first book that I ever looked at from Thacker, but for some reason never read it.  I have since read many of his short stories and I am currently reading The Depths, and enjoying that thoroughly.

When a bomb goes off at Yellowstone National Park, threatening the stability of the world’s largest active volcano, the reclusive park ranger Harvey “Ben” Bennett is startled to realize that the blast itself wasn’t the only threat: the bomb released a virus into the air, and the outbreak is beginning to infect and kill more and more people.

Ben teams up with Juliette Richardson, a driven CDC agent working inside the newly-formed BTR (Biological Threat Research) team, to find the people behind the act of terrorism.

When the attacks get personal, Ben and Julie take it upon themselves to seek out and destroy the threat before it’s too late.

A race across the United States, chasing terrorists, dodging bullets, and escaping the threat of a deadly virus outbreak and military apocalypse.