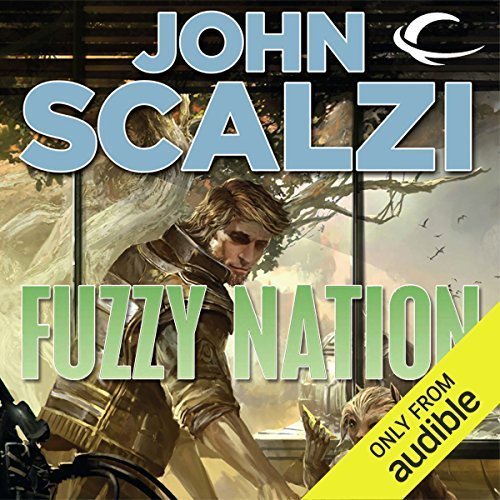 So Many Fun, Cute, Interesting, and Intriguing Things…

The first thing to know about Fuzzy Nation is that it isn’t a sequel to the 1962 classic Little Fuzzy by H. Beam Piper. Instead, it is a retelling of this unique and interesting story but with attention being made to the different world the audience finds itself in now, versus the early 1960s. John Scalzi worked with Piper’s estate, and with their approval, released this story in 2011.

There are so many fun, cute, interesting, and intriguing things in this story, I barely know where to begin. The world that was created in this story, mirroring very closely to the original, is a complex one where this feels like just one small story among a huge stockpile of others. Like any good sci-fi universe, this could easily become its own playground to create a canon unlike others yet feel so familiar.

John Scalzi tells of a roguish prospector by the name of Jack Holloway who in the very first scene we see him giving his dog, Carl, the opportunity to press the button that sets off explosives in a remote cliffside of this uninhabited jungle planet. I was hooked, and not just because I’m an insane dog person but because I am a truly insane dog person.

The story is of Jack inadvertently coming across this small little family of odd, fuzzy creatures who have seemed to take a shine to him. Along the way, Jack has made a stone discovery that could net him, and the company he contracted for, an incalculable sum of money. But, the catch he discovers is that this company will do whatever it takes to strip the planet clean so long as there are no sentient or intelligent beings on the planet. That’s the rule that is put forth by the colonial authority who oversees these off-world mining excursions. Unfortunately, Jack quickly discovers that his little fuzzy friends are very much intelligent and very much sentient.  This sets off a legal battle to try and show that this is the case, which will cost Jack his fortune and potentially ruin the mining company. The end is one that is expected, but welcome and caps off the adventure nicely.

As far as narrators go, there are few I enjoy more than Wil Wheaton. He has an easy-going cadence and tone, as well as a cadence that illustrates his own love of the genre. While he doesn’t do a lot of the varied voice inflections common to other narrators, he still brings a unique voice to each character and you have no problem keeping up with who is who. One thing to note, however, is that Scalzi is a fan of using the speech modifier ‘said’ for his dialogue. In print, this can easily be overlooked because the eye can scan over it quickly and barely acknowledge it as it is read. When narrated, though, it is easy to hear the word and can get a little tedious. It doesn’t hurt the story or its understanding, just should be noted as a listener.

In John Scalzi's re-imagining of H. Beam Piper's 1962 sci-fi classic Little Fuzzy, written with the full cooperation of the Piper Estate, Jack Holloway works alone for reasons he doesn't care to talk about. On the distant planet Zarathustra, Jack is content as an independent contractor for ZaraCorp, prospecting and surveying at his own pace. As for his past, that's not up for discussion.

Then, in the wake of an accidental cliff collapse, Jack discovers a seam of unimaginably valuable jewels, to which he manages to lay legal claim just as ZaraCorp is cancelling their contract with him for his part in causing the collapse. Briefly in the catbird seat, legally speaking, Jack pressures ZaraCorp into recognizing his claim, and cuts them in as partners to help extract the wealth.

But there's another wrinkle to ZaraCorp's relationship with the planet Zarathustra. Their entire legal right to exploit the verdant Earth-like planet, the basis of the wealth they derive from extracting its resources, is based on being able to certify to the authorities on Earth that Zarathustra is home to no sentient species. Then a small furry biped - trusting, appealing, and ridiculously cute - shows up at Jack's outback home. Followed by its family. As it dawns on Jack that despite their stature, these are people, he begins to suspect that ZaraCorp's claim to a planet's worth of wealth is very flimsy indeed and that ZaraCorp may stop at nothing to eliminate the fuzzys before their existence becomes more widely known.

Also by this author: The Dispatcher