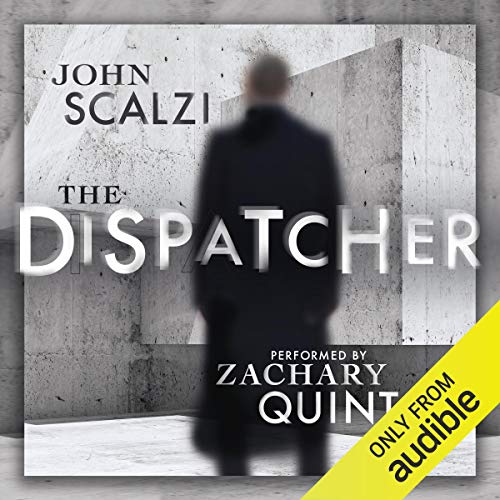 There are a few names in the modern Sci-Fi/Fantasy genre that should immediately grab anyone’s attention. Names like William Gibson, Orson Scott Card, and Robert Jordan give us the knowledge and comfort that whatever lies inside will be a worthy read. John Scalzi has earned his place equally in that recognition. His consistent delivery of well-written and characterized stories let us know that his name will be spoken of for many years to come. The Dispatcher proves yet again this to be true.

The story opens in a hospital as a surgeon scrubs in and a hospital administrator argues with them that this gentleman will be joining inside for the surgery whether the doctor likes it or not. And they really don’t like it. The reason they don’t like it is shown quickly when we discover that this man will step in and kill the patient if it looks like the doctor won’t be able to save them. Yep, kill them. Legally, quickly, and efficiently.

In this highly imaginative concept for an alternate timeline to our own, the world is irrevocably changed when a sudden, mysterious, and all too strange occurrence happens: no one who is murdered dies. If a person dies by suicide, accident, or just medical reasons, they die for good. However, if there is any form of assistance to their death where another takes the responsibility of killing them, that individual dies for a few moments, disappears, and reappears in their home. Naked and as fine as they were some time before the murder. It’s been going on for a little while now and while no one can explain why it happens, the world just has had to adjust dramatically to it happening.

This is where the Dispatchers come in. Tony Valdez is a licensed, bonded dispatcher who is assigned to cases like these surgeries by the insurance company so they can step in and kill the patient before they die on the operating table. He has been doing it for eight years, one of the first of this new type of public service. They use specialized equipment to safely and quickly dispatch the patient and then write up a report on their findings.

On this day, just after Tony has dispatched the patient who wasn’t going to make it through the surgery, a detective sought him out. Another Dispatcher, the one Tony covered this shift for, has gone missing and the detective would like Tony’s help in finding answers. From here the story takes a decidedly noir detective story turn, all the while maintaining this strange new world of no murder they find themselves in. Along the way, they find those that go a long way in figuring out loopholes to murder and nearly discover themselves in the same crosshairs.

The Dispatcher is an Audible Original short story narrated by Zachary Quinto. This was the first story I’ve heard with his narration and I’ve got to say I was impressed. Smooth intonation, solid delivery, great characterizations, and impeccable timing really cemented my decision to trust if I see his name in the narrator’s spot again. If that whole “acting thing” doesn’t work out, he could easily slip into full time narration. Truthfully, I don’t see his acting not working out anytime soon. His list of credits grows by the year and shows no sign of slowing, and we are all the better for it.

Zachary Quinto - best known for his role as the Nimoy-approved Spock in the recent Star Trek reboot and the menacing, power-stealing serial killer, Sylar, in Heroes - brings his well-earned sci-fi credentials and simmering intensity to this audio-exclusive novella from master storyteller John Scalzi.

One day, not long from now, it becomes almost impossible to murder anyone - 999 times out of a thousand, anyone who is intentionally killed comes back. How? We don't know. But it changes everything: war, crime, daily life.

Tony Valdez is a Dispatcher - a licensed, bonded professional whose job is to humanely dispatch those whose circumstances put them in death's crosshairs, so they can have a second chance to avoid the reaper. But when a fellow Dispatcher and former friend is apparently kidnapped, Tony learns that there are some things that are worse than death and that some people are ready to do almost anything to avenge a supposed wrong.

It's a race against time for Valdez to find his friend before it's too late...before not even a Dispatcher can save him.

Also by this author: Fuzzy Nation