I Was on Pins and Needles the Whole Time

EXODUS is set in the midst of the Great Depression. Families gathered their possessions and headed west for a brighter future and better opportunities. Some find what they were looking for. Some make it out west only to return to their old homesteads. Then, there were the ones who never made it out west. Those people made a stop in Exodus, an old mining town located in eastern Arizona. John and Anne Carlson make the trek out west with their newborn baby. They need a place to fill up and eat so they stop in Exodus. The sleepy little town seems fine on the surface, but there is something sinister lurking in the mines below.

Kimberly A. Bettes does a great job setting the tone for the book. Bettes describes the opening scene so well. There’s this table used only for cutting meats in this mysterious room. There’s an Edison phonograph playing an upbeat tune near the table. As the author describes what the table and room are used for, the antagonist processes meat. My jaw hit the floor while listening to this book. Keep in mind; this is the first damn page. One minute I’m tapping my toes to the music, then the next thing I know, my hair is standing straight up on my arms.

There’s also a vast desert and a little family (the Carlsons) trying to make it to the nearest town to extend their trip a little longer with some food and gas. Anything could go wrong. You have a couple with a newborn baby exposed to the elements of Arizona–the heat and coyotes. But there is something far worse waiting for them in Exodus. The cool part about this is you know about it but the family doesn’t.

I was on pins and needles the whole time. John goes looking for gas, while Anne and the baby stay with the car. Splitting up is a bad idea, especially on a cross-country trip. Hours pass and John doesn’t return. The sun starts setting and the coyotes come out. Anne takes off towards town, trying to beat the impending darkness and the hungry coyotes. She runs right into the old diner. It smells of death and decay outside, but she doesn’t think much of it. She’s just grateful they’re out of harm’s way. Or are they?

EXODUS is full of death, decay, and cannibalism in the vein of The Texas Chainsaw Massacre and Wrong Turn. This book also contains some incest. The scenes are vividly grotesque. Bettes gives the characters depth and backstory. The story doesn’t stall or slow down while you read about the characters’ history. I was invested in the protagonist, but the antagonist makes the story. From start to finish, the story stays nice and tight. I could smell the mines. I could smell the decaying flesh and the blood-soaked table. Anne is literally in hell. Madness. Pure madness I tell you. Will she save her family and survive the experience?

Rick Gregory does a great job reading this book. Gregory doesn’t have a monotone voice, which is a definite plus. I think the listening experience enhanced this story for me. This is my first experience with Kimberly A. Bettes, but it definitely won’t be my last. I dig the book cover, too.

At the height of the Great Depression, thousands of families who have lost everything are left with no choice but to make the pilgrimage westward in search of a new life. Some will find what they're looking for. Some will not and will then be forced to make the long journey back home. Then there are the others, those who never make it to either place because they made a stop along the way in a town called Exodus, an abandoned silver mining town in eastern Arizona where nothing good ever happens and most folks never leave.

The Carlsons - John, his wife Anne, and their newborn baby James - are one of countless families heading west, and they're one of many unfortunate families who decide to make a stop in Exodus. The sign on the highway promises food and gas, both of which the Carlsons need. But the sign doesn't advertise all that Exodus has to offer.

It doesn't mention the torture.

Caught now in a horrifying world of madness, Anne has to fight to save her family, though doing so will push her to the very brink of her own sanity.

A horror novel for mature audiences only. 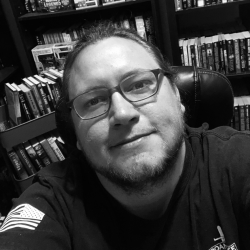