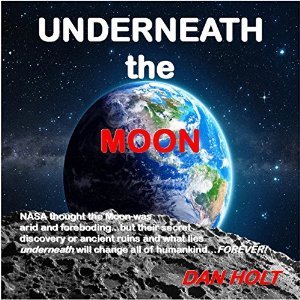 What did NASA see up there, and why are they hiding it?

Imagine you’ve been spending most of your time enhancing photographs from the Apollo missions looking for something out of the ordinary.  Now imagine you find something, something so big you almost can’t believe it could be covered up.  Now imagine you were a former NASA astronaut who lost his family in a horrific car accident and you weren’t allowed to go to be an astronaut anymore.  Well, these two worlds will collide in Underneath The Moon.

Narration for Underneath the Moon was done by J. Scott Bennett — at first I wasn’t sure how I was going to feel about his narration style.  He seemed to have a theater voice, which is fine for some forms of literature, but for a conspiracy laced science fiction book I wasn’t so sure it would work.  Either he toned it down, or I got used to it because for the rest of the book I didn’t seem to have any issues with his narration style.  Bennett does a fine job with this book and gives a nice addition to the overall feel of the book

Easily, one of my favorite parts of this was explaining the new technology behind the new engine that they were planning on using.  I just loved the science behind it, and the large change that it could/would bring into the transportation industries.

The main characters, while a little “cooky” as most conspiracy theorists are, were still likeable and enjoyable additions to the story. I wasn’t sure how I was going to feel about them throughout.  They just kind of felt “out there” without much explanation.  Granted, that’s how most conspiracy theorists tend to be, but I felt this book was missing the “why” factor for some of the characters.

The science and engineering part of the story was incredibly interesting and I’m glad that it was included, it really made the venture and everything that happens later in the story plausible.

Overall, the story was above average good until the very last 5-10 chapters.  Especially the final chapter.  I wasn’t sure how this story was going to end, and I won’t lie it didn’t end the way I had envisioned at all, but I’m okay with that.

Douglas Hastings’ passion for anything NASA drove him to analyze a treasure trove of Moon photos taken during all Apollo missions. Doug had started to believe the conspiracy theories and rumors that had swirled for years; that NASA had discovered more than just rocks on the Moon and had conspired to keep the rest of the world in the dark.

A super computer’s enhancement and compilation of the old photos proved his belief and sent him on a quest that has now revealed revolutionary new space travel technology and will enable him to lead a group on a return journey to explore ancient ruins on the lunar surface. But Doug’s pursuit of the truth and discovery of a destroyed GLASS city on the Moon pale in comparison to what lies underneath the lunar surface. What he finds will solve the mystery of a long-dead Apollo Astronaut and provide clues to the missing elements of Earth’s ancient history. But, even he isn’t prepared for the discovery that will reveal the past and change the future of mankind; FOREVER!