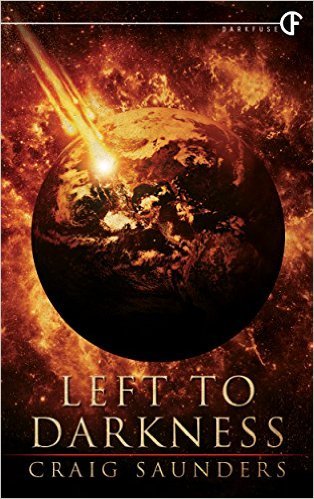 Left To Darkness – Apocalyptic Fiction at it’s near best

A meteor has struck Earth.  The world is now a different and much darker place to live.  In Craig Saunders new book, Left To Darkness — follow very few survivors as they try to assume their new roles in the dark new world they live in.

I’m not familiar with Saunders’ work (and he’s written a lot of books), but I am familiar with DarkFuse.  They publish some of the best horror and similar genre’s in the indie game right now.  This was no different.  There were a few times I found myself shaking my head in confusion (I’m not sure if it was the book or me) or just utter disbelief, but this book was a high-octane dose to my heart a few nights.

The characters were believable even if some of the situations seemed slightly far-fetched (isn’t that what fiction is supposed to be anyway).  It’s nice when an author can write a great story with great characters and mix the two into a wonderfully blended book.  Left To Darkness seems to do this.  The character arc of Frank was really neat to follow from beginning to the end of the story.  I’m intrigued to figure out what happens with this series.

Overall, other than a few moments of “what the…” this book was good.  Chalk this up as another win for DarkFuse.  Every time I see one of their books on sale for $0.99 I almost always pick it up unless it looks like a straight up horror movie, I just can’t do those.  But if apocalyptic fiction is what you’re looking for — this book is for you.  You won’t be disappointed.

I was given a copy of this book by NetGalley in exchange for an honest and unbiased review.

A meteor strikes the Earth. Dirt and dust fill the air. Only a few people remain under the setting skies, and those who still live find it’s not God’s England anymore.

Lines are drawn between the dark and light. For the darkness, James Finley and his cult for the end of days. On the side of light, Paul Deacon, the lost policeman, and Dawn Graves, the last mother.

To survive, they must put their lives in one man’s hands: Frank Liebowicz, a killer with a soft spot for lost causes. Because come Armageddon, God won’t choose his champions. 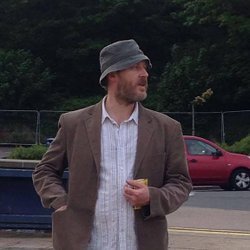 Craig Saunders is the author of over thirty novels and novellas, first published with ‘Rain’ in 2011. Stories include ‘Deadlift’, ‘Vigil’, ‘Damned to Cold Fire’ and ‘Masters of Blood and Bone’, called ‘A rare treat from a master of horror’ by The Examiner. Which is nice, isn’t it?

His writes dark fiction/horror with an element of crime or mystery, and epic fantasy. His shorter fiction appears in various anthologies and magazines. Sometimes he dabbles with humour – but only when he’s feeling serious.

Born in 1972 in London, England, Craig did some stuff (like growing up – abridged version), then studied Japanese and Law in Cardiff, Wales. After deciding the legal side of the law wasn’t much fun, he worked in Japan. Lived there, too. Obviously. Hell of a commute, otherwise. He experimented with jobs as diverse as a translator and interpreter, English teacher, editor, dog walker, carpenter, doorman, and others besides…and hated them all. Except the carpentry bit. I like a nice bit of wood.

He lives in Norfolk, England, with his wife and children. He likes nice people, warm sheds and good coffee.

Find out more at:

One thought on “Craig Saunders – Left To Darkness”