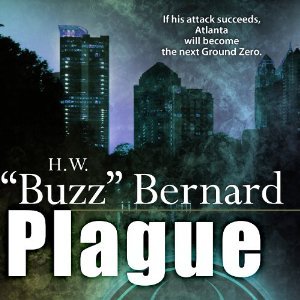 A threat unlike any ever seen on American soil…

A threat unlike any ever seen on American soil is just days away from being released.  An altered version of Ebola which allows for airborne transmission is about to be released in Atlanta and could have the world on its knees in a few short days.  This story is about the CEO of a biotech company who realizes that there is a lot more going on within his new company than he first realized.  He must find out the truth and stop the terrorist before it’s too late.

Drew Commins does the narration for Plague and does a perfect job.  This is the second book that I’ve listened to that Commins narrated for Bernard and I can see why he’s done more than one book for him.  Commins gives each character their own voice and continues them throughout the story, making following different characters easy.  Commins takes this heavy and sometimes dark book and narrates it in a way that keeps the listener coming back for more.

I love that Bernard did research for this book.  I could probably write an entire review on the accuracy and the amount of work he put into the scientific descriptions and the background of the diseases and their spread.  There were parts that I was “geeking” out about because Bernard was explaining things like the non-fiction books I’ve read on this disease (Thanks, Richard Preston).

Plague takes place in urban/suburban Atlanta and has a lot of local things that a non-local wouldn’t understand, but I’m sure if you were from Atlanta this book would be even scarier.

Bernard allows the reader to feel perilous throughout most of the story.  Wanting to jump in and help prevent this atrocity from being committed. This, to me, is a sign of excellent writing.  Allowing the reader to feel like they are invested in the story without making them feel overwhelmed.

Overall, Plague is a phenomenal bio-thriller up there with the likes of Richard Preston’s fiction and non-fiction work.  Well-researched and incredibly well told, Plague had me up late listening and worrying about the things that were within its pages.

In only a matter of days, 9/11 and the destruction of the Twin Towers will be rivaled by a lone-wolf terrorist attack on America. Atlanta is targeted as Ground Zero for the most horrifying plague in modern times.

Deep in the secret recesses of a Cold War lab, the Russians created tons of deadly bio-weapons. Now, decades later, a protégé of that Russian research is about to release weaponized Ebola into the heart of the South’s most iconic city: Atlanta, where the symbols of American “decadence” range from a happily diverse population to the Coca-Cola museum and CNN building.

A preliminary test of the horrifying virus demonstrates the unspeakable suffering of its victims–and alerts the Centers for Disease Control that a terrible pandemic is in the making. CDC Virologist Dr. Dwight Butler begins a frantic effort to track down the source before it’s too late.

For new BioDawn CEO Richard Wainwright, it quickly becomes clear that the “accidental” plane crash that killed the pharmaceutical company’s entire executive hierarchy may have some connection to the evolving threat. Suddenly Richard is being stalked by a hit woman. He and Butler join forces to find the lone terrorist at the center of a plan that could unleash a modern Black Plague on the western world.

His debut novel, EYEWALL, which one reviewer called a “perfect summer read,” was released in May 2011 and went on to become a number-one best-seller in Amazon’s Kindle Store.

His second novel, PLAGUE (“One of the best thrillers of 2012″–novelist Al Leverone), came out in September 2012, and won the 2014 EPIC eBook Award in the suspense/thriller category.

His third novel, SUPERCELL (“Races along with the speed of a twister”–novelist Michael Wallace) was published in late 2013 and became a best seller on Kindle as well as the winner of the 2015 EPIC eBook Award in the suspense thriller/category.

His most recent novel and the third in his “weather trilogy,” BLIZZARD (“A terrific book”–novelist Deborah Smith) was released in February 2015.

Before becoming a novelist, Buzz worked at The Weather Channel as a senior meteorologist for 13 years. Prior to that, he served as a weather officer in the U.S. Air Force for over three decades.  He attained the rank of colonel and received, among other awards, the Legion of Merit.

His “airborne” experiences include a mission with the Air Force Reserve Hurricane Hunters, air drops over the Arctic Ocean and Turkey, and a stint as a weather officer aboard a Tactical Air Command airborne command post (C-135).

In the past, he’s provided field support to forest fire fighting operations in the Pacific Northwest, spent a summer working on Alaska’s arctic slope, and served two tours in Vietnam. Various other jobs, both civilian and military, have taken him to Germany, Saudi Arabia, and Panama.

He’s a native Oregonian and attended the University of Washington in Seattle where he earned a bachelor’s degree in atmospheric science; he also studied creative writing.

He and his wife Christina live in Roswell, Georgia, along with their fuzzy and sometimes over-active Shih-Tzu, Stormy. Buzz is represented by Jeanie Loiacano of the Loiacano Literary Agency.