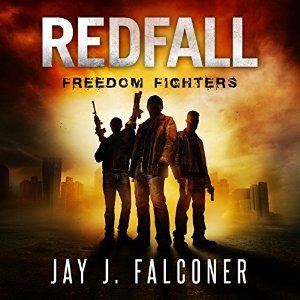 I will try my best not to write any major spoilers to the first book, but I make no promises since this is a direct continuation. Characters who are alive or not may be mentioned. If you have not read the first book, I would recommend you do so before you begin to read this review. (Buy it here on Amazon) (Or here on Audible)

Redfall: Freedom Fighters picks up where the first Redfall book leaves off. The kids from Pandora are trying to gather information and work with Simon Redfall to figure out their next move. Wix’s brother’s camp has been attacked and now we must find out if he has made it or not. All the while the red rain still continues to fall.

Gary Tiedemann did the narration for Freedom Fighters and he did a fantastic job, just like the first book. Using different voices for different characters allows the listener to follow along easily and without confusion. I’m glad that Falconer is working with Tiedemann — he has the perfect voice for Simon and gives the kids and other characters great voices too.

Freedom Fighters answers a lot of questions from the first novel, but still leaves me asking some more when it finishes. And saying “finished” is a strong word to use as Falconer also leaves this book pretty open. I 100% understand that reasoning behind ending it where he did from a trilogy standpoint. But to me as a reader, I felt a little bummed out that I have to go and get the last book to get an “ending.” At least, I hope that there is some sort of conclusion in the third book.

The attention to detail is something that really keeps me coming back for more.  You can really tell that Falconer knows his stuff.  From weaponry to proper military formation and tactics — the Redfall series has it all.  A master at the modern-day cliffhanger ending. (Even if it drives me nuts.)

With that being said, I still really enjoyed Freedom Fighters. Falconer really sucked me in with the first book and I feel for the characters and the unique plot. Well, this picks up where it left off and doesn’t really take his foot off of the gas until the book ends.

Overall, the story was just as interesting as the first Redfall book. Allowing the reader to be taken along for a thrill-ride full of undercover meetings, the mysterious red rain, the clouds, all their stored energy, and kids who won’t back down from a fight. Redfall: Freedom Fighters was a wonderful continuation of the series and I cannot wait to hear the third book!

(I’ve debated on adding this section about nine different times, MOST people can skip over this part, but I had to include it from my point of view). Note to the author: I grew up in Erie, PA – which is in Western PA. While there are Amish who live in Western PA (near where I went to school and where friends of mine still live), the book mentions taking place near Lancaster County, PA – that’s about as far East as you can get. I know that about 98% of people won’t notice or care, but it’s not correct and I needed to point it out.

When the red rain stops, will civilization survive?

As militant groups arm themselves and take to the streets, survivalist Simon Redfall and his band of freedom fighters scramble to uncover more facts about the swarm of red storms suffocating the planet.

The more they dig, the deeper the conspiracy grows. Yet, it all seems to point back to one man and his weather control technology, Jeffrey Hansen. A former military intelligence officer who will stop at nothing to achieve his goals.

When more of the puzzle comes together, Simon realizes the threat to humanity is even greater than anyone could have ever imagined. Something sinister is about to crawl out of the shadows and reveal itself.

No one is safe.

No one can stop it.

No one saw it coming.

Jay J. Falconer is a Kindle Press author, survivalist, prepper, engineer, and Sci-Fi junkie who lives in the mountains of northern Arizona where the brisk, clean air and stunning mountain views inspire his day.

When he’s not busy paying the bills with his regular, full-time engineering job, he’s either trying to steal a few hours at night or on weekends to work on his next novel, or he’s out training, shooting, hunting, or preparing for whatever comes next.