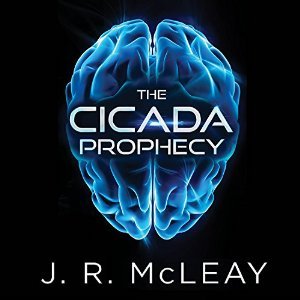 Forever young… that was the plan, anyway

Humans have long tried to find the fountain of youth.  In the future, it appears that doctors and scientists alike have found the proverbial fountain of youth and it literally involves keeping people young… very young.  11 years old (on the outside at least).  There is a new surgery that is mandatory, allowing the world to live a young and full life much longer than their parents and grandparents were able to.

The narration for The Cicada Prophecy was done by Todd McLaren who does a wonderful job.  He doesn’t even flinch at some of the complex scientific scenes in the book and makes reading a book that’s as detailed as this fun and exciting.

At first, I thought it would be heard to imagine a bunch of adult 11-year-olds running around and at times it was.  I just don’t see a doctor or a member of the UN to be 11 years old.  Other than having a slightly difficult time imagining the characters looking a certain way I thought that the premise was fascinating.

The science in the book was really interesting and I believe that it was based on some true findings.  You can tell that the author has either worked in medicine before or did a lot of research before writing this.

A few times I felt like the book got bogged down in a Steven King-esque detail tirades (I’m thinking the scene in the graveyard), but they were few and far between.

Overall, The Cicada Prophecy was a fascinating look into the near future and what could happen if we begin to mess with science.  It also featured a pretty interesting conflict between science and religion that has existed for decades.

Since the dawn of civilization, it's been mankind's greatest dream: immortality and eternal youth. Dramatic advances in medical science have finally made it possible. But in order to preserve everyone's youthful state, they must undergo an irreversible operation before passing into adulthood. A special hormone patch maintains each person's body in the form of a preadolescent 11-year-old.

Under the authority of the United Nations, surgeon general Dr. Richard Ross oversees the universal program that promises a peaceful utopian society. Emotionally and intellectually mature juveniles now rule the world. But not everyone is happy with the new arrangement. A group of rebels from the Garden of Eden church plots to overthrow the new regime and return the world to its natural order.

The idyllic setting is quickly overturned. A series of sinister schemes and escalating medical complications sets the world on a course of imminent extinction. Building to an action-packed climax, Dr. Ross and his endocrinologist girlfriend must find and save the one person who carries the genetic link for preserving the human race.

Also by this author: Unlucky Day

J.R. McLeay is a graduate of the University of Toronto and lives in Calgary, Canada with his wife and two rambunctious dogs. J.R. writes fictional stories incorporating the latest advances in science, especially in the fields of biogerontology (the science of aging) and astrobiology (the study of life beyond earth).

He likes to weave real science into engaging stories of what the future might hold for us as we continue to explore new frontiers. Most of his book themes are based on hypotheses he’s developed after extensive study and scientific research. He wants his readers to be stimulated as much by the new applications of emerging science as they are about the stories and characters embodying these possibilities.

Stay tuned for more books from J.R. McLeay in these genres. Happy reading!