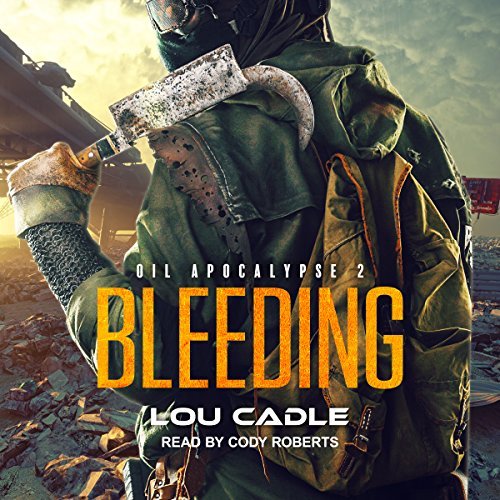 Bleeding is the second book in the Oil Apocalypse series by Lou Cadle. It takes place as one group of outsiders are trying to survive a world where the oil is gone.  Where people have gone over the edge to survive and will take anything that they want. They are just trying to eek out an existence outside of this world — farming, utilizing both the sun and the wind to give them power.

There were a couple brutal scenes in this book (that I thought were needed) and I feel like scenes like this are oddly missing from Post-Apocalyptic books.  I think that authors are scared of writing about what would really happen.  Cadle hasn’t shied away from that at all.  The scene that I’m speaking of and then the scenes with the same girl after were perfectly written in my opinion. I’m genuinely curious to see what happens with her in the other books.

I thought that this was a pretty enjoyable book.  I finished it quickly and enjoyed it almost as much as the first book.  I could tell that this book fought its own internal struggle between being an epic followup and preparing us for the next book in the series.  There were some scenes where I thought, oh wow, Cadle is going to finish it all here, and other times I knew that I was just being set up for more books.

Overall, Bleeding falls into a slight sophomore slump trying to prepare us for better things to come but had enough action and character development to make it an easy read.

Dev and Sierra--who have come of age emotionally and as warriors--head down to Payson to spy on the men who have taken over the town. What they find there horrifies them.

And Sierra’s aggressive streak leads them into a confrontation with these invaders, one that will put everyone’s lives at risk.

Can the neighborhood survive the end of oil?

Book 3, which completes this section of the tale, will be out in late November 2017.

Also by this author: Slashed
Also in this series: Slashed