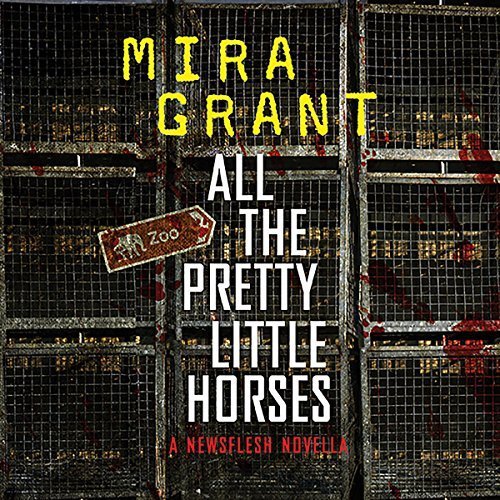 I Needed This Story To Be Told

If you ever wanted to read about what the Mason’s before they adopted Georgia and Shawn  — we finally have a novella for that.  All The Pretty Little Horses tells the story of Stacy and Michael Mason.  We know about them from the other books in the Newsflesh series, but this is the first time that they are front and center.  The story picks up right after the trial for the “murder” of the Mason’s first and only biological son.  Stacy is in a deep depression. The only thing that seems to pull her out is photography and taking video of the post-Rising world.  Thus the start of the blog begins.

I always hoped that in the back of my mind that Grant would write a “prequel” type novel or novella that told of the Pre-Rising world.  This isn’t it completely, but it’s the furthest back that I’ve read in any of her books.  We get to finally meet Stacy and Michael Mason before they adopted the main characters in all the other Newsflesh books.

Sometimes novellas can feel rushed or too short, but Grant is able to tell these incredible side stories to the Newsflesh series with her novellas. And honestly, I like them as much if not more than the main stories.  Sure, this series is easily in my top 3 series of all time, but part of that is the way that she was able to continue them with these novellas.

I’m never sure which novella is going to be the last, but if this is it I think I’d be okay with that.  Of course, I want more.  I’m greedy, but I think that the world that Grant wanted to tell has been mostly told.  I’ve also wondered why this series never became one of the Kindle Worlds books that I enjoy so much.  (If you don’t know what they are – authors allow other authors to  build on the world that they already created). I would love to read what some of the other authors I love would do with the Newsflesh world.  A couple angles that I would love to read would be: the start of the plague (either first hand or right as it was happening), a real broadcast journalist or news station dealing with hiding and/or false reporting, other parts of the US/world that have been affected, and more).

Overall, All The Pretty Little Horses is my second favorite novella in the Newsflesh series behind “How Green This Land, How Blue This Sea”.  Newsflesh reader will love this addition to the series. If you haven’t read any of the other books — this might be one of more approachable novels because I think it could be read as an intro to the series.  Sure, you get none of the zombies (or very little), but it really is pre-Feed.

A Newsflesh novella from the New York Times bestselling author that brought you Feed, Mira Grant.Stacy and Michael Mason are among the most famous heroes of the zombie apocalypse. Stacy, however, has fallen into a deep depression after having to shoot their infected son. In the aftermath of the pandemic, they start publicly documenting the recovery effort, which Michael hopes will take Stacy's mind off of her trauma and help her recover.As they film the rescue of an enclave of orphans and report on the orphanages that have sprung up to care for traumatized, parent-less children, they begin to consider the last, greatest step of recovery: adoption.
More from Mira Grant


Into the Drowning Deep


Newsflesh Short FictionApocalypse Scenario #683: The BoxCountdownSan Diego 2014: The Last Stand of the California BrowncoatsHow Green This Land, How Blue This SeaThe Day the Dead Came to Show and TellPlease Do Not Taunt the Octopus

Mira Grant lives in California, sleeps with a machete under her bed, and highly suggests you do the same. Mira Grant is the pseudonym of Seanan McGuire – winner of the 2010 John W. Campbell Award for best new writer. Find out more about the author at www.miragrant.com or follow her on twitter @seananmcguire.

Audiobook: Beyond The Inferno by Shannon