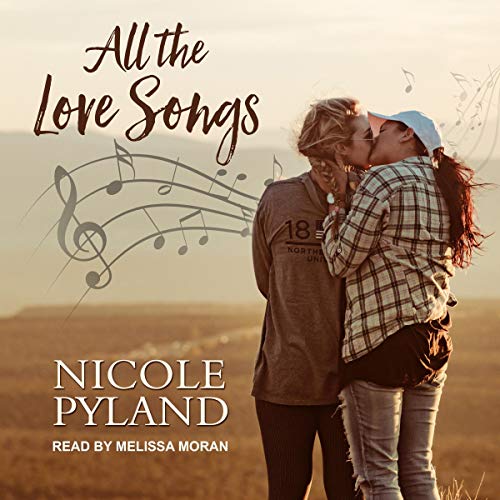 All The Love Songs was one of those back and forth novels. It would be super cute one moment and then it would rip your heart the next.  The first 40 or so percent was absolutely adorable.  It was the meeting, the falling, and the first moments of love. But after that, this book was an absolute wild ride.  It kept taking turns I didn’t expect and I honestly didn’t have any guesses as how it was going to end. (My mid-30 year old brain had some thoughts, but this is a fictional story).

Every time I found myself really liking this book it would get a little too… desperate. It’s really hard to describe.  Basically, this book was written about a younger couple. I tried to remember what that time was like and Pyland isn’t wrong in the way that their relationship is described.  It was just hard to read as an adult. It’s funny, the same thing that made me cringe at parts of this book (scenes like “so you want to leave me?”) also made me respect it because it’s damn accurate at telling the story of early 20-year-old love.

I can’t tell if this was another one of those “just me” issues, but the names felt too similar. Probably not a problem when reading the book – but when listening to it – I kept forgetting if Peyton was the singer or the actor and the same went for Mackenzie. I understand the names aren’t similar at all – but for some reason I had a really hard time with this. I don’t really know of a better solution, it was just something I struggled with personally.

Now, I understand I’m not the typical demographic for romance novels, especially LGBTQ ones, but I did really enjoy this book.  I love love, so reading about a couple falling in love, especially a unique love like this was great.  I thought that Pyland did a pretty good job including a character that wasn’t easy to love.  One that had flaws and issues.  One that had a hard time dealing with herself let alone someone else.  I found the personality flaws of each character (especially Mackenzie and Peyton) to be extremely realistic.  This book, for all the things I was confused about, or frustrated at, absolutely nailed the human aspect of it.  We’re all a little messed up – and Pyland allows that to be part of the story instead of hidden in the closet only to come out later and ruin everything.

I really wanted to say something snarky about the title of this, but the way it was used within it and the way it was explained made me really like it.  It’s one of those cute things you say to someone you’re head over heels in love with.  It’s definitely a feeling that you get when you find someone that made all of your other relationships feel like they were fake. So, I tip my cap to you Ms. Pyland. Bravo.

I’ve gone back and added so much to this review from it’s first writing. I keep wanting to point out the things that Pyland covers that I was surprised by.  She also covered how mainstream media would react (and fans) to someone who wasn’t known to be gay as coming out as gay.  I’ve had friends who have come out to family and friends to no reaction at all (other than a hug, and affirmations that everything was fine, nothing changed) and I’ve known people who have been disowned.  That was from family – being in the limelight would make that reaction so much worse.  You’ll obviously always have real fans, who love and care about you no matter what. But you’ll have people who freak out. Some who won’t understand and others who will, for some effed up reason, feel personally attacked by someone coming out as themselves.  It was another topic that I thought was well-covered in this novel.

Melissa Moran’s performance of this was stellar. I thought she did a great job voicing the two main characters along with the others that come along for the ride.  She made this book fly by for me.

Peyton Gloss is the world’s most famous and popular singer and songwriter, known for her chart-topping hits as well as her famous girl squad and July 4th events, inviting all of her famous friends to celebrate. This year, she did something even more extravagant than ever and invited her friends to join her for a week-long adult summer camp experience.

Mackenzie Smyth dared to audition for a TV show. Thinking she had no chance of getting the part, she went along with it. Five years later, she’s one of the most popular young actresses in Hollywood. She’s also socially awkward and struggles with getting to know new people and spending time with her peers.

Lennox Owen is Hollywood royalty and has been famous since birth. She’s remained in the business because she didn’t know what else, if anything, she could do, and because it was what was expected of her.

When Lennox and Kenzie meet, there’s electricity between them. And the camp is the perfect opportunity for them to explore what might be. But after the magic of their week away from the world dissipates, can they still find that spark and make their relationship work?