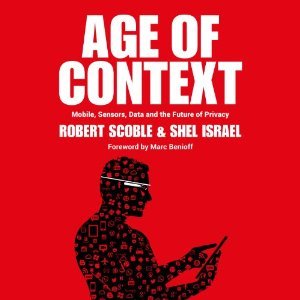 Age of Context – A look into the future (or the now) of business.

This is a look at what is going on right now in the world of business, since writing this, Israel has written another book on the same topics that update things and bring everything into the new and ever-changing world of social media.

The narration was done by Jeffrey Kafer, and boy does he nail this.  How hard do you think narrating a book about technology and business are?  I can’t imagine that it’s easy by any means, but Kafer seems to do this flawlessly.  I’d first heard Kafer when he narrated the newer book written by Israel, and I had to go back and listen to this.

Like I mentioned before, I read these books out of order so some of the information felt redundant and outdated to me, but with that being said, this is a really great “intro to technology for business owners” type of a book.  Written with the business owner in mind, Age of Context explains the different forms of technology and how they are being used/implemented in the world of business.

Israel and Scoble really have a grasp of what is going on, and it shows in their expert analysis and explanation of these sometimes confusing technological topics.  They will definitely be added to my list to read in the future, and I sure how Kafer will narrate for them again!

This book, being written in 2014 isn’t outdated yet, but it will be in the next few years.  The authors seem to understand this and write everything out as it stands now and even goes into detail about things that are coming soon.

This should be required reading for business majors at all major colleges.  These are topics that, sadly, mostly college professors don’t talk about at all in class.

In 2006, co-authors Robert Scoble and Shel Israel wrote Naked Conversations, a book that persuaded businesses to embrace what we now call social media. Six years later they have teamed up again to report that social media is but one of five converging forces that promise to change virtually every aspect of our lives. You know these other forces already: mobile, data, sensors and location-based technology.

Combined with social media they form a new generation of personalized technology that knows us better than our closest friends. Armed with that knowledge our personal devices can anticipate what we’ll need next and serve us better than a butler or an executive assistant. The resulting convergent superforce is so powerful that it is ushering in a era the authors call the Age of Context. In this new era, our devices know when to wake us up early because it snowed last night; they contact the people we are supposed to meet with to warn them we’re running late. They even find content worth watching on television. They also promise to cure cancer and make it harder for terrorists to do their damage. Astoundingly, in the coming age you may only receive ads you want to see. Scoble and Israel have spent more than a year researching this book. They report what they have learned from interviewing more than a hundred pioneers of the new technology and by examining hundreds of contextual products.

What does it all mean? How will it change society in the future? The authors are unabashed tech enthusiasts, but as they write, an elephant sits in the living room of our book and it is called privacy. We are entering a time when our technology serves us best because it watches us; collecting data on what we do, who we speak with, what we look at. There is no doubt about it: Big Data is watching you. The time to lament the loss of privacy is over. The authors argue that the time is right to demand options that enable people to reclaim some portions of that privacy.

Also by this author: Lethal Generosity

Shel Israel and Robert Scoble have been friends for several years. They have appeared in the media and on conference stages many times. Both have a passion for how technology will change the world.

Robert Scoble is among the world’s best-known tech journalists. In his day job as Startup Liaison for Rackspace, the Open Cloud Computing Company, Scoble travels the world looking for the latest developments on technology’s bleeding edge. He’s interviewed thousands of executives and technology innovators and reports for Rackspace TV and in social media.
He can be found at scobleizer.com. You can email him at Scobleizer@gmail.com, and on social networks as Robert Scoble.

Shel Israel helps businesses tell their stories in engaging ways as a writer, consultant, and presentation coach. He writes The Social Beat column for Forbes and has contributed editorially to BusinessWeek, Dow Jones, Fast Company and American Express Open Forum. He has been a keynote speaker more than 50 times on five continents.
You can follow him at http://blogs.forbes.com/shelisrael and talk to him at shelisrael1@gmail.com or at most social networks as shelisrael.

Audiobook: The Improv by Budd Friedman &

How to American: An Immigrant’s Gu