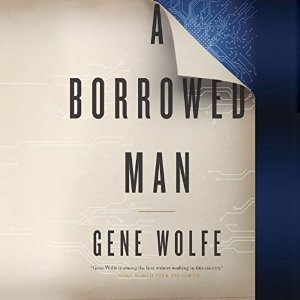 Part Mystery, Part Science Fiction, A Borrowed Man Has Something For Everyone.

Smithe is a clone, he is a clone of a long-deceased mystery writer.  This is a story about him, and that writer… If I tell you much more it’ll give away too much!

Kevin T. Collins is a tour de force again in this novel.  His narration is the reason I liked the book as much as I did.  Another wonderful job done by him and the Audible Studios crew.  Quality is as you would expect, flawless with no issues or qualms.

I love Sci-Fi, and I can take-or-leave Mystery books, but when they are weaved together like Wolfe has accomplished with A Borrowed Man, I love the both of them equally.  The story was one of those “whats around the next corner” page-turners that you just don’t see anymore.  Well, I can’t really call it a page turner when I listened to the audiobook, but still I couldn’t put my headphones down and found myself staying up late a few nights so that I could finish this.

Due to the mystery nature of this book, I cannot reveal much out about the story because it will give too much away, just know that almost all of your questions throughout will be answered by the time the novel finishes.

I don’t know how I had never heard of Gene Wolfe before, but I can tell you I will think of him more now.  I will definitely be checking into some of his older books and adding them to my to be read piles.

A Borrowed Man: a new science fiction novel, from Gene Wolfe, the celebrated author of the Book of the New Sun series.

It is perhaps a hundred years in the future, our civilization is gone, and another is in place in North America, but it retains many familiar things and structures. Although the population is now small, there is advanced technology, there are robots, and there are clones.

E. A. Smithe is a borrowed person. He is a clone who lives on a third-tier shelf in a public library, and his personality is an uploaded recording of a deceased mystery writer. Smithe is a piece of property, not a legal human.

A wealthy patron, Colette Coldbrook, takes him from the library because he is the surviving personality of the author of Murder on Mars. A physical copy of that book was in the possession of her murdered father, and it contains an important secret, the key to immense family wealth. It is lost, and Colette is afraid of the police. She borrows Smithe to help her find the book and to find out what the secret is. And then the plot gets complicated. 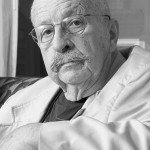 Gene Wolfe is one of the most admired and respected living writers of SF and fantasy. He is the author of The Fifth Head of Cerberus, the bestselling The Book of the New Sun tetralogy, as well as among many others including Soldier of the Mist, The Sorcerer’s House, Home Fires, The Knight, The Wizard, Peace, and The Book of the Long Sun. He is also a prolific writer of distinguished short fiction, which is collected in many volumes over the last four decades, most recently in The Best of Gene Wolfe. He received the World Fantasy Award for Life Achievement, the Edward E. Smith Memorial Award, and multiple Nebula and Locus awards, among other honors. In 2007, he was inducted into the Science Fiction Hall of Fame. In 2012, he was awarded the Science Fiction and Fantasy Writers of America Grand Master Award. He lives in Barrington, Illinois.