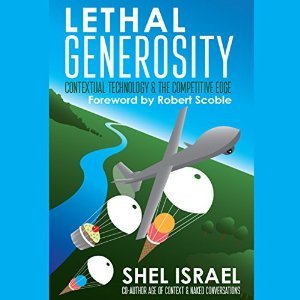 Bringing Marketing into the 21st century (where Millennials thrive)

Shel Israel writes and coins the phrase Lethal Generosity which is meant to explain what companies are doing now to dominate their field and get the new generation (Millennials) to interact with brands.  He talks a lot about the different brands that have succeeded and where other brands have failed.

I had never really considered listening to a business focused book on audio (I felt like the typical businessperson driving to and from work listening to an audiobook on how to be better at business).  But I’m really glad that I did.  Jeffrey Kafer provides the perfect “soundtrack” for this book.  His calm and understanding tone allows for a breezy and quick listen to this short book.  Kafer had the benefit of this book being written to be easily understood — which makes the audiobook version even more valuable.  It reads like a fiction novel but is a non-fiction book with lots of really great details in it.  This was my second book from Kafer among a (now) growing list in my backlog.  I’ll listen to pretty much anything he narrates now.

As a preface, I must mention that I am a marketing guy.  I work for myself and I am finishing my degree majoring in Marketing.  I also usually hate being considered a Millennial.  This book took some of the stigmas away from the name Millennial and explained how to market to and employ this generation of people.  Israel explains in detail how to work with Millennials the right way, and how to advertise to them.

If you have been out of the loop for a while and don’t understand what it means when someone says “Uberize” or the Uber of something — this book will help you understand that a bit more.

My favorite part is the real stories that Israel employs to make the points/topics incredibly easy to understand.  This book would make a great “text” for a Marketing class–especially a new media marketing class (which sadly not many universities are making required yet).  A quick read at 134 pages and a great audiobook performance by Jeffrey Kafer.

Lethal Generosity: Contextual Technology & the Competitive Edge is the sequel to Age of Context: Mobile, Sensors, Data, and the Future of Privacy, a critically acclaimed and best-selling book co-authored by Shel Israel and Robert Scoble.

The previous book reported on the rapid convergence of five technology forces - mobile (and wearables), social media, the Internet of Things (IoT), location technologies, and data creating the promising - and the occasionally freaky sensation that our devices are starting to know us better than the closest people in our lives.

The story picks up two years later in Lethal Generosity, where the freakiness has faded and retailers and other public-facing companies are rapidly adopting these new technologies.

This time, instead of technologies converging with each other, these contextual forces are converging with humans in the form of Millennials, the first generation of digital natives. The book examines them as customers, employees, and competitors, and advices companies run by older cultures on how to adapt to this significant marketplace change.

The result of all this is that power has shifted from sellers and brand efforts to buyers who use social media to influence each other. Companies who ignore this shift do so at their peril. Companies who do adjust will flourish, the author argues.

Just what should brands and merchants do: Israel prescribes a policy of lethal generosity. By being kind to your customers at every touch point, you'll prevent any customer attempts to hijack them through traditional marketing.

Also by this author: Age of Context

Shel Israel writes and speaks about technology’s impact on business and life. He has been a keynote speaker on all continents not covered by ice. 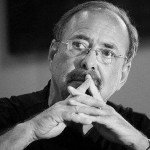 Israel’s newest book, Lethal Generosity: Contextual Technology & the Cutting Edge is scheduled for release in September 2015. It is a sequel to Age of Context. While the former book focused primarily on the technology, the new work examines how that technology applies to retail and other public-facing businesses.

Growing weary of the required writer’s vow of poverty, Israel left writing to become a PR executive, where he ran his own agency for nearly 20 years. He returned to writing and speaking in 2001.

He is now a recovering publicist.