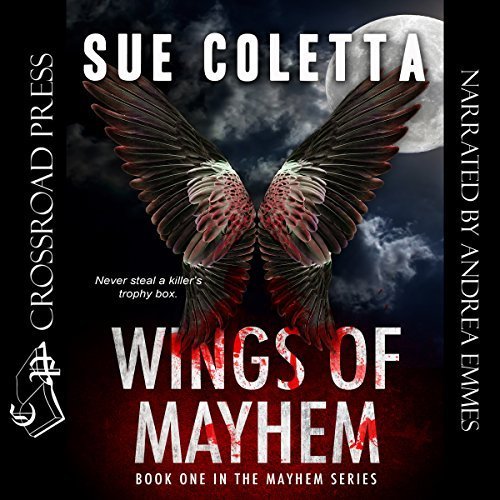 Wings of Mayhem Had Some Blunders

I was excited to read this because of the many glowing reviews, but I think I read a different book than everyone else because this was…. meh!

Shawnee is a police hacker by day, cat burglar by night. One night she tries to rob the wrong house! What she finds will turn her life upside down! Now the premise sounds awesome, right!! But it wasn’t, there were so many things that niggled me about this, it made it very hard to enjoy.

My main problem was Shawnee herself. She does an awful lot of extremely foolish things. There was a lot of eye-rolling on my part. A big problem for me was the fact that she found out the identity of the killer early on in the book, but SAID NOTHING!! Even when he continued to kill, she SAID NOTHING! She was more worried about the potential for herself to go to jail, than the lives of others. I just couldn’t wrap my head around this fact. Also, she is supposed to be this amazing hacker, yet she couldn’t do something to finger the killer? Why couldn’t she have done something to point the police to search his house? It frustrated me no end!!!

There is also a part where Shawnee breaks into the police station to acquire something, but she lets someone come along with her. Why would she??? This person had absolutely no need or reason to go with her. Then this person seemed to make an awful lot of noise, but nobody heard?? THEN, a detective sees something in the grate, and doesn’t investigate!!! In a police station!! It was actually really silly.

There are quite a few more things that I found irritating, but I’m not going to list them here. It’s not all bad though, the plot is fairly fast paced and kept me reading. I did finish the story, which was also a plus!! Other than that, I just found it a slog to go through. The many eye rolling and silly moments made it extremely hard to thoroughly enjoy.

Now onto the only thing that really kept me listening, and that was the narrator. I have listened to a few by this narrator, but I have to say, she blew me away on this one!! The emotion she put into this was phenomenal!! She performed this flawlessly and really put her all into it. Highly recommend her narration!!

I was voluntarily provided this audiobook for free from the author, narrator, or publisher. This in no way affected nor influenced my thoughts.

A serial killer stalks the streets....

Shawnee Daniels - computer forensics specialist/hacker for RPD by day, cat burglar by night - always believed her "fearlessness rules" mantra would keep her on top and out of jail. When she hacks a confiscated hard drive at the Revere P.D., she focuses on a white-collar criminal accused of embezzlement. To teach him a lesson and recoup the funds she breaks into his massive contemporary in Bear Clave Estates. Jack has even more secrets, deadly secrets, secrets worth killing over.

A cat burglar picks the wrong house to rob....

Shawnee thinks she made it out clean until a deadly package arrives at her door soon after. He's found her. As a glowing eagle taunts her Skype screen, Jack tells her she stole his precious trophy box - and he wants it back!

When her "helpful" best friend convinces her to date charismatic Detective Levaughn Samuels, her two worlds threaten to implode. Ordinarily Shawnee keeps a firm line between her professions, but dating Levaughn might help her get this psycho off her tail.

In this lightning-fast-paced psychological thriller of secrets and lies, Shawnee juggles being stalked by a serial killer, dating the lead detective on the case, and tap dancing around her librarian best friend.

Member of Mystery Writers of America, Sisters in Crime, and International Thriller Writers, Sue Coletta is an award-winning, multi-published author in numerous anthologies and her forensics articles have appeared in InSinC Quarterly. In addition to her popular crime resource blog, Sue co-hosts the radio show “Partners In Crime” on Writestream Radio Network every third Tuesday of the month from 1 – 3 p.m. EDT/EST (see details at www.suecoletta.com). She’s also the communications manager for the Serial Killer Project and Forensic Science, and founder of #ACrimeChat on Twitter.

2017 Award-winner of Feedspot’s Top 50 Crime Blogs (Murder Blog sits at #6), she shares crime tips, police jargon, the mind of serial killers, and anything and everything in between. If you search her archives, you’ll find posts from guests that work in law enforcement, forensics, coroner, undercover operatives, firearm experts…crime, crime, and more crime.

For readers, she has the Crime Lover’s Lounge, where subscribers will be the first to know about free giveaways, contests, and have inside access to deleted scenes. As an added bonus, members get to play in the lounge. Your secret code will unlock the virtual door. Inside, like-minded folks discuss their favorite crime novels, solve mindbender and mystery puzzles, and/or relax and chat. Most importantly, everyone has a lot of fun.

Sue lives in northern New Hampshire with her husband, where her house is surrounded by wildlife…bear, moose, deer, even mountain lions have been spotted. Course, Sue would love to snuggle with them, but her husband frowns on the idea.