Silicon Man had me questioning my “being”

AI helps humanity with nearly every aspect of their lives.  But some of these AI are looking for more. A movement is forming demanding equal rights for the AI not always doing so in the most legal ways.  That is where AI-TAC comes into play. Cole’s job within AI-TAC is to hunt down these “rogue” AI’s — and in doing so he will come face to face with more than just the movement.

Narration for this was done by Joe Hempel and he absolutely knocks it out the park.  Joe is definitely a go to narrator for me especially when it comes to the technothriller genre.  He just has the perfect voice and narration style to fit these fast-paced technical stories.  As with the prequel that Hempel also narrated–this story was perfectly told and I’m actually glad that I listened to the audiobook version over reading it first.

I feel like I’ve been getting lucky with my reviews lately, the last few books (and a couple after this one) were all on my backlog that I was seriously interested in–but life and other reviews got in the way.  I’m sincerely glad that I was given a shot to give this a listen.

The story is extremely well written and fast paced.  Sometimes a story, even with good characters, story, and arcs can be drawn out.  This is not the case with Silicon Man.  The action scenes, story arc, and character development are tightly weaved into an immaculate web.  Massa really does a great job making a story both interesting and totally believable.  He had me actually covering my mouth in shock/awe a few times in this story.

This is definitely a story that I cannot write the review that I want, because I will give it away — but just know this: if you like plot twists, great story turns, and overall story that leaves you asking questions but feeling satisfied at the same time. This story is for you.

The setting wasn’t clearly announced, but it definitely felt like the near future.  I did find myself pulling some comparisons to the movie I, Robot (which I also said when I was reviewing Silicon Dawn).  But, I didn’t feel like this was a total ripoff either.  Massa has a way of writing so that you feel familiar with something but doing it in a totally new and unique way.

Overall, I finished this in one sitting.  It took me one night to listen to this, and I’m glad that I took the time to do so.  A great story with great characters.

A global pandemic has cut the human population in half. An android workforce fills the void left by the devastation. But some of the AIs have grown tired of being slaves. Some want freedom. An underground movement of runaways has sprung up and wages a shadow war with a simple objective - equal rights for artificial people.

Enter Commander Cole Marsalis, head of the AI-TAC first response team trained to deal with the rogue robots. Now he has been tasked with the ultimate undercover mission - infiltrate the android underground. But to do so, he will have to become that which he hates the most....
A machine! 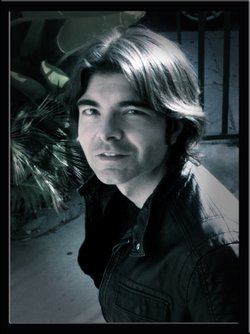 William Massa is a screenwriter (Return to House on Haunted Hill) and script consultant. He has lived in New York, Florida, Europe and now calls Los Angeles his home.

William writes action/adventure stories with a horror, dark fantasy or science fiction flavor. He is currently hard at work on his upcoming horror-action series OCCULT ASSASSIN and preparing sequels to some of his other novels.

The Book of Flora (Road to Nowhere #3) b