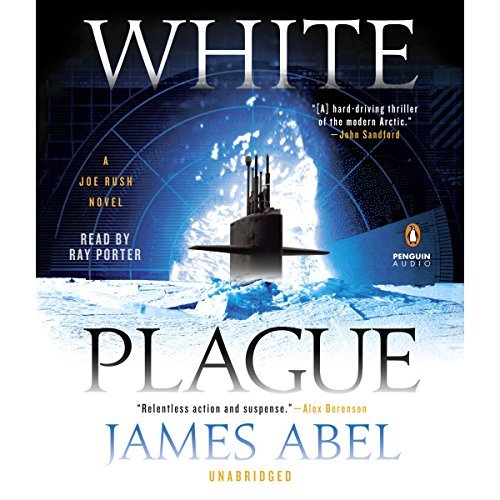 My overwhelming feeling about this book is that it felt like a reverse version of the show (and I assume the book) The Last Ship.  That one is about a ship that’s out in the same region as the ship in this one but comes back to a virus sweeping the world.  White Plague takes the opposite course and tells the story of what would happen if a virus was found in the Arctic and started to propagate there.

I’ve had this book on my TBR pile for a long time.  I cannot remember where I was flying to or from, but I saw someone on our flight that was reading this paperback and the cover and title instantly drew me in.  I’ve wanted to read it since that day and I’m glad that I did. Ever since that day, it’s been sitting in my no man’s land of TBR books that aren’t author or narrator requests.

White Plague was one of those books that I had high hopes for.  Most times when this happens the book lets me down, but that didn’t happen at all with this.  Abel was able to write a book that was extremely detailed without feeling like there was too much information.  I liked every character that I was supposed to and I felt for them when things started to go south.

Abel had this incredible ability to make me “feel” for these characters.  That means that he did a wonderful job opening up about them and making them feel real.  A character that feels real; with real emotions and feelings will always trump those who feel made up.  And each and every important person in White Plague felt real to me. I just loved them all.

The story itself was riveting. I was glued to my seat.  I would listen on my drives to and from work and just sit in my car and listen to this until I had to peel myself away to go inside.  I stayed up late to finish it and I’m glad I did because it was a doozy of a book.

Full of medical, political, and every other thriller-based genres you can think of White Plague will be a book that sticks with me for a while. The final thing that I thought when I finished this book was “I am glad that I bought the other 3 books in this series already!”

In the frozen waters of the Arctic, Marine bioterror expert Joe Rush races to save a submarine crew from a lethal threat…

“The pleas for help stopped coming just after five in the morning, Washington time. The Pentagon staffers cleared for handling sensitive messages sat in horror for a moment and then tried other ways to reach the victims. Nothing worked so they called the Director, who phoned me.”

In the remote, frozen waters of the Arctic Ocean, the high-powered and technically advanced submarine U.S.S. Montana is in peril. Adrift and in flames, the boat—and the entire crew—could be lost. The only team close enough to get to them in time is led by Marine doctor and bio-terror expert Joe Rush.

With only thirty-six hours before the surviving crew perish, Joe and his team must race to rescue the Montana and ensure that the boat doesn’t fall into enemy hands. Because a fast-approaching foreign submarine is already en route, and tensions may explode.

But that’s the least of their troubles. For the surviving sailors are not alone on the sub. Something is trapped with them. Something deadly lethal. Something that plagued mankind long ago, when it devastated the entire world. And the crew of the Montana has unknowingly set it free. Now, Joe and his team must not only find a way to save the Montana and her crew, but stop a lethal horror of apocalyptic consequence from being unleashed on all humanity.

Trojan: The Enemy Within by David L Wall