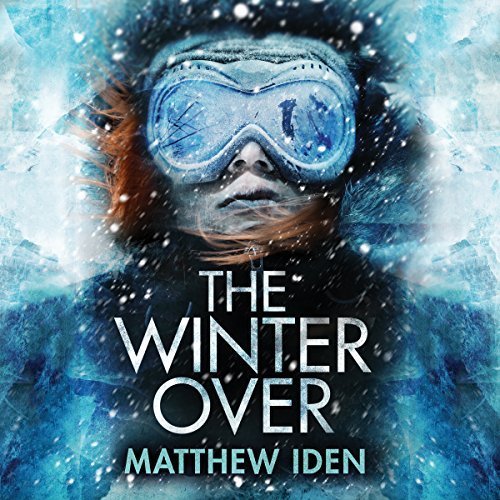 This is a book that I bought purely on the cover.  I bought the Kindle edition in early January, and then picked this up as a Whispersync deal once it was released on audio.  I featured it in my new and notable releases of the week when it was released — all based on the cover.  Once I dug below the permafrost, I realized that there was a lot going on with this story.

Matthew Iden weaves an incredibly emotional story in The Winter Over.  It tells of a research station in the middle of nowhere — on the South Pole.  The people who “winter” here are researchers, scientists, and engineers who are looking to either prove something to someone or themselves.  Or as it was put “they say everyone who comes to Antarctica is either running from something or to something.”  The Winter Over tells the story of someone who might be doing a little of both, Cass Jennings is ready to stay the long and grueling winter months of no light and no way out of the station.

The story itself weaves in and out of a few main characters but focuses mainly on Cass and her struggles.  She was an interesting character because, for 75% of the book, you have almost no idea what her back story is, but you know it’s important.  Once you figure it out, it’s almost too late in the story for you to feel good or bad for her.

The other characters that are introduced all play their parts well, and with the twists and turns that Iden throws in, you won’t know what hit you… or who.

The narration was done by Karen Peakes who does a pretty nice job.  My only complaint was the accents. I know that the characters were foreign, most likely with an accent — but they weren’t really well done and sometimes they were hard to understand.  Along the same was the announcement in the book — these were done a little muffled (on purpose to give it more of an authentic feel).  This usually works for me, but something about the way that Peakes did it didn’t work for me.  But, overall, her narration was good and enjoyable allowing the story to progress nicely.

Overall, The Winter Over felt a little long and drawn out to me, but it was still enjoyable.  I picked a book by its cover and I wasn’t disappointed! I just checked on Amazon to see how this book was categorized, and I was surprised that Thriller and Psychological Thriller weren’t listed. That is definitely the type of story this is.

Each winter the crew at the Shackleton South Pole Research Facility faces nine months of isolation, round-the-clock darkness, and one of the most extreme climates on the planet. For thirty-something mechanical engineer Cass Jennings, Antarctica offers an opportunity to finally escape the guilt of her troubled past and to rebuild her life.

But the death of a colleague triggers a series of mysterious incidents that push Cass and the rest of the forty-four-person crew to the limits of their sanity and endurance. Confined and cut off from the outside world, will they work together or turn against one another? As the tension escalates, Cass must find the strength to survive not only a punishing landscape but also an unrelenting menace determined to destroy the station—and everyone in it.