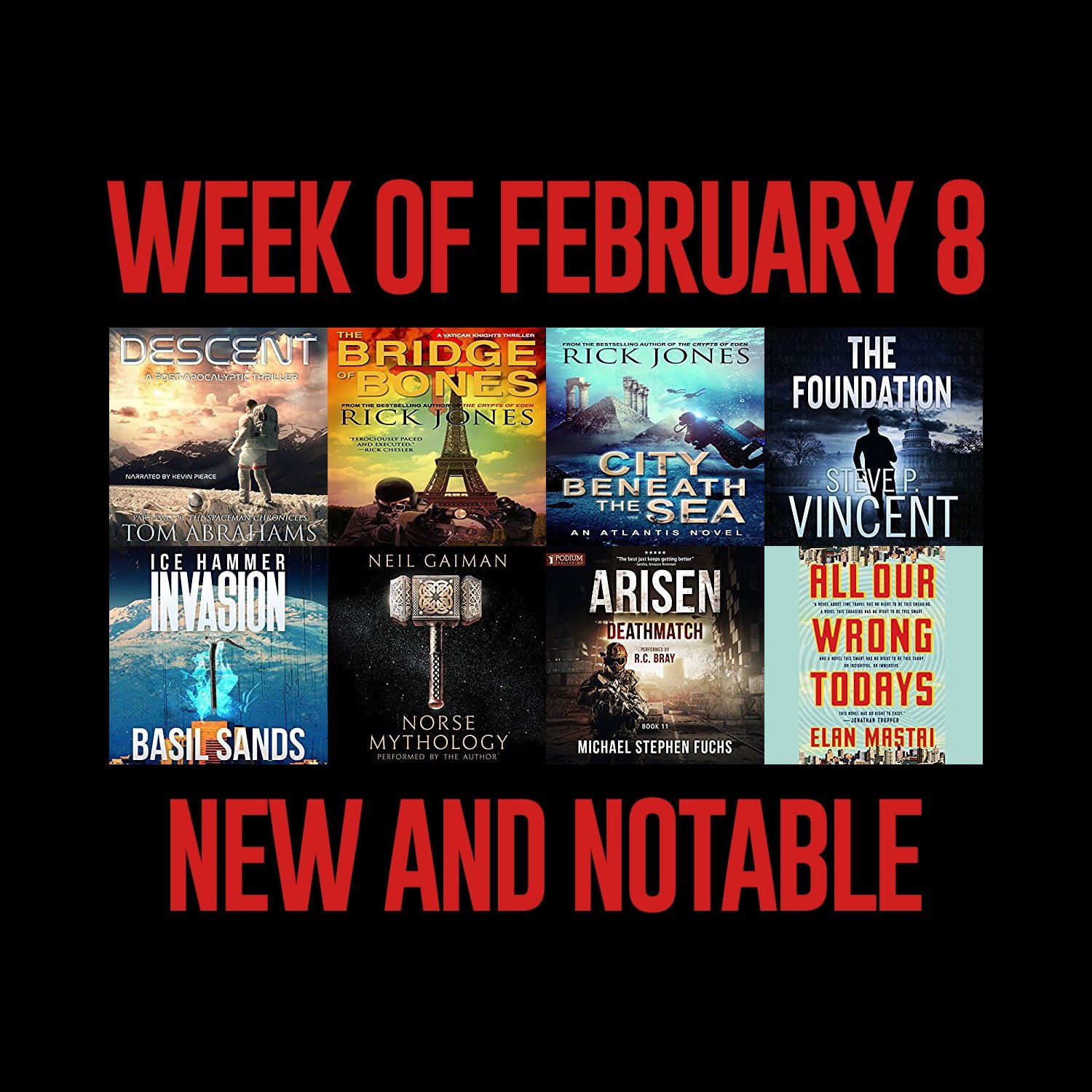 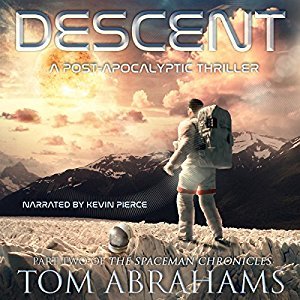 Clayton Shepard is lost, cold, alone, and determined to find his way home.

But he’s landed on a planet he doesn’t recognize. Earth isn’t the same place he left months earlier.

There is little light, no heat, and limited communication.

As he works to find his way back to his family, they cope with the struggles of a new reality and a quickly devolving society.

What none of them know is that the radioactive blast that plunged their lives into darkness was only the first one.

More is on the way. 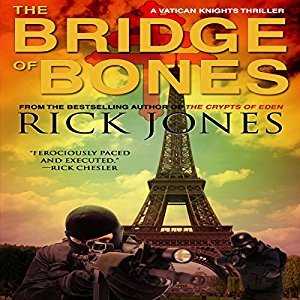 The Bridge of Bones: The Vatican Knights Series, Book 5 by Rick Jones
Narrated by Todd Menesses

While vacationing in Paris, Shari Cohen’s children are kidnapped by Jadran Božanović, a Croatian kingpin who runs a human-trafficking cartel and is as deadly as the knife he wields. Few dare to challenge him. And even fewer dare to defy him. With time running out and her resources running thin, Shari calls upon the aid of Kimball Hayden and his team Vatican Knights – an elite group of commandos dedicated to protect the sovereignty, interests, and citizenry of the Church – and are once again reunited. But Kimball finds that his team is quickly outmanned and outgunned, the death toll climbing against forces that are the deadliest the Knights have ever faced. With his back against the wall, Kimball is forced to choose Justice over Law by taking on Jadran Božanović in a contest that only one man can survive. But Kimball soon learns that the Croatian is as ruthless as his legend and just as powerful, if not more so, than the Vatican Knight himself.

City Beneath the Sea: The Quest for Atlantis, Book 1 by Rick Jones
Narrated by Jonathan Johns

An earthquake off the Florida Straits uncovers a city that had been hidden beneath the sea for centuries. It’s a land of dark miracles and black wonders, and a place that harbors extraordinary secrets and deadly curiosities.

Months after their narrow escape from Eden, archeologists and symbologists John Savage and Alyssa Moore are called upon to examine archaic texts inside the presumed city of Atlantis. The writings are similar to those discovered in Eden, the symbols a roadmap to mankind’s destruction by the year 2026. Along with a commando unit, John and Alyssa quickly discover the pitfalls that were created to keep a fabled relic safe. After deadly challenges and conquests within the structures, they eventually come across the Emerald Tablet – -the legendary plaque that holds the secrets of the universe.

But is the Emerald Tablet truly a source of great power and knowledge? Or is it disguised as Pandora’s box that once opened it would quickly mark the beginning of mankind’s end? From the best-selling author of the Crypts of Eden and The Vatican Knights comes book four of a John Savage and Alyssa Moore adventure (The Crypts of Eden trilogy), and book one in the Quest for Atlantis series, City Beneath the Sea. 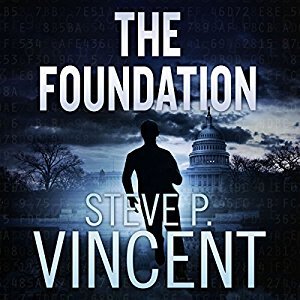 When a corrupt think tank, The Foundation for a New America, enlists a Taiwanese terrorist to bomb a World Trade Organization conference, the US and China are put on the path to war.

Star journalist Jack Emery is pulled into a story far more dangerous than he could have imagined. Because the Foundation’s deputy director, the ruthless Michelle Dominique, recognizes that whoever controls the message controls the world. And she will take control, no matter the price.
Enter Jack’s boss, Ernest McDowell, owner and chairman of the largest media empire on the planet. In the midst of political upheaval, EMCorp is about to become the final play in the Foundation’s plan. When Dominique traps the EMCorp owner in her web, Jack’s the only one left to expose the conspiracy before it’s too late.

As the world powers smash each other against the anvil of Taiwan, Jack will risk everything to battle the Foundation and prevent them from taking control amid the devastation of a global war. 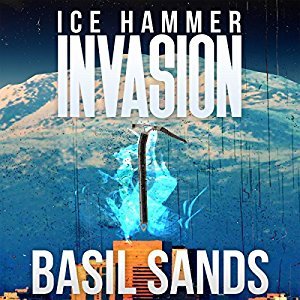 It only took an instant for the world to come crashing down.

The bombs came first, and the troops were close behind. Life in the dream that was America ceased when a deadly new alliance of communist states from Russia, China, and their allies invaded from the North.

The invasion splits Brad Stone’s family apart. His wife, Youngmi, is captured and exploited by Alaska’s new communist warlord. Brad and his sons narrowly avoid massacre and retreat into the icy wilderness. Brad, a former Marine, finds himself thrust to the front as the warrior they call “Ice Hammer” – a leader, a legend, and the most wanted man in occupied Alaska.

Brad, Youngmi, and their sons Ben and Ian must find their way through the horrors of war. They may not live to see victory, but they will not live as slaves. They have already learned a brutal truth:

The age of peace has ended. The age of the Ice Hammer has begun.

Norse Mythology by Neil Gaiman
Narrated by the author

Neil Gaiman has long been inspired by ancient mythology in creating the fantastical realms of his fiction. Now he turns his attention back to the source, presenting a bravura rendition of the great northern tales. In Norse Mythology, Gaiman fashions primeval stories into a novelistic arc that begins with the genesis of the legendary nine worlds; delves into the exploits of the deities, dwarves, and giants; and culminates in Ragnarok, the twilight of the gods and the rebirth of a new time and people. Gaiman stays true to the myths while vividly reincarnating Odin, the highest of the high, wise, daring, and cunning; Thor, Odin’s son, incredibly strong yet not the wisest of gods; and Loki, the son of a giant, a trickster and unsurpassable manipulator. From Gaiman’s deft and witty prose emerge the gods with their fiercely competitive natures, their susceptibility to being duped and to duping others, and their tendency to let passion ignite their actions, making these long-ago myths breathe pungent life again. 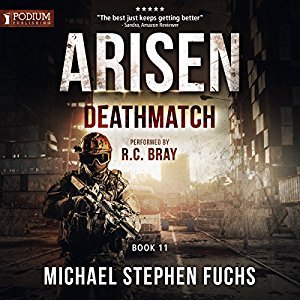 Humanity’s most fearsome enemy is no longer death.

Alpha and Marsoc meet their match

Lurking in the bush is the dark shadow cast by the operators – a terrifying force every bit their equal in skill, ferocity, and sheer resolve…but utterly unconstrained by humanity, compassion, or brotherhood. Now, to complete their mission and save the world, the operators will have to pay with their lives, or their souls, or possibly both.

One troop descends into hell

Rolling the dice on a last-ditch plan to save London by retrieving the Kazakh’s zombie-annihilating virus, Jameson leads his last best men into the dragon’s den – an underground bunker home to the savage and hyperskilled Spetsnaz Alfa group. Getting out alive is a million-to-one shot – and then their real problems begin.

The Kennedy is burning

The world’s deadliest maritime commando force were made homeless when their battlecruiser went to the bottom of the Atlantic. Now they’re looking for payback – and a replacement nuclear-powered warship. But not only is the whole JFK in play – so is Dr. Park, his vaccine design, and thus the fate of the entire world. 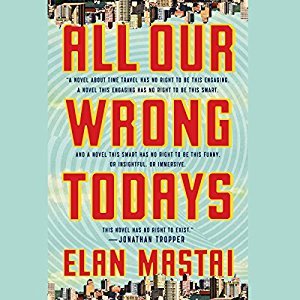 All Our Wrong Todays: A Novel by Elan Mastai
Narrated by the author

You know the future that people in the 1950s imagined we’d have? Well, it happened. In Tom Barren’s 2016, humanity thrives in a techno-utopian paradise of flying cars, moving sidewalks, and moon bases, where avocados never go bad and punk rock never existed…because it wasn’t necessary.

Except Tom just can’t seem to find his place in this dazzling, idealistic world, and that’s before his life gets turned upside down. Utterly blindsided by an accident of fate, Tom makes a rash decision that drastically changes not only his own life, but the very fabric of the universe itself. In a time-travel mishap, Tom finds himself stranded in our 2016, what we think of as the real world. For Tom, our normal reality seems like a dystopian wasteland.

But when he discovers wonderfully unexpected versions of his family, his career, and – maybe, just maybe – his soul mate, Tom has a decision to make. Does he fix the flow of history, bringing his utopian universe back into existence, or does he try to forge a new life in our messy, unpredictable reality? Tom’s search for the answer takes him across countries, continents, and timelines in a quest to figure out, finally, who he really is and what his future – our future – is supposed to be.

All Our Wrong Todays is about the versions of ourselves that we shed and grow into over time. It is a story of friendship and family, of unexpected journeys and alternate paths, and of love in its multitude of forms. Filled with humor and heart, and saturated with insight and intelligence and a mind-bending talent for invention, this novel signals the arrival of a major talent.