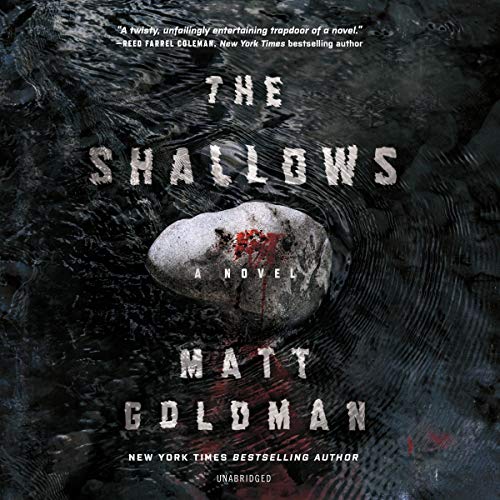 This One Will Stick With Me

When I saw that a new Nils Shapiro book was being released I knew that I was going to love it even before MacLeod Andrews spoke the opening of the book.  Goldman’s writing in both Gone To Dust and Broken Ice were both fantastic.  I’ve gotten to know Nils in books one and two and now we’re really getting into the nitty-gritty of his personality and life by the time The Shallows picks up.

This story was fast-paced but also well thought out.  Goldman is able to write a story that I have to keep listening to.  He just kept throwing in little twists and turns into The Shallows that kept me up late into the night.  Nils is an interesting and deep character that is still being developed three books in.  I love that about him and about this series.  I’m still learning about the main character. I think you could have picked this book up out of order and understood almost all of it.  There is definitely some references to the other stories (taking an arrow to the arm for example).

Blackstone’s choice to work with MacLeod Andrews was perfect. He is the voice of Nils in my head now.  And it’s been a perfect match since book one. I love when it just works like that and the Shapiro stories is a definite case of it being the perfect fit.

I’m not sure how many more stories Goldman plans to write in this series – but I will definitely be picking them up. Another win from me, and another Suspense/Thriller that I won’t be able to shake for some time.

In the words of Lee Child on Gone to Dust, "I want more of Nils Shapiro." New York Times best-selling and Emmy Award-winning author Matt Goldman happily obliges by bringing the Minneapolis private detective back for another thrilling, stand-alone adventure in The Shallows.

Business is booming for private investigator Nils Shapiro and his partners.

Lawyer Todd Rabinowitz is found tied to the dock outside his Minnesota home with a fishing stinger through his jaw. His widow, Robin Rabinowitz, calls Nils to the crime scene and asks him to investigate her husband's savage murder. She's not the only one. Soon, Nils has more job offers than he can handle. Robin's boyfriend. Todd's partner at his law firm. One of Todd's clients, a polarizing Congressional candidate. The local police, in over their heads. The FBI.

Their motives are complicated at best, and as Nils unravels the convoluted case, the bodies pile up. Someone doesn't want him to discover what happened to Todd, and won't stop until they silence Nils as well.