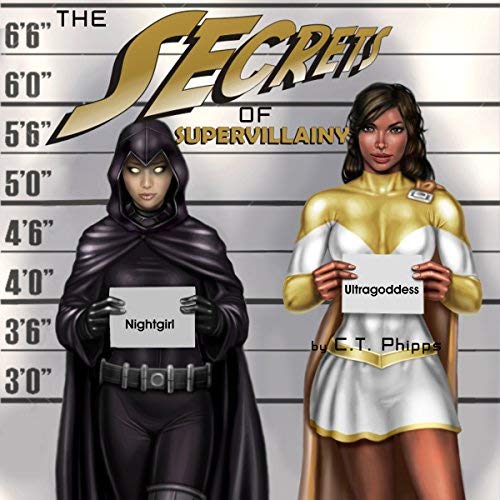 There are two things that I love about this series. One is the humor and sardonic way that Phipps writes. He’s able to write these characters, supervillains, heroes, and other random people who just absolutely crack me up. The interaction between Cloak and Merciless always have me rolling. Especially when they are having a non-silent convo that others can hear.

The second thing that I like is the antihero overarching storyline. Merciless considers himself to be a Supervillain, but… if you’re three books into this series, you know that he’s not. Sure, he’s not the best superhero perse, but he’s easily got to be one of the worst supervillains. The best part about this is that it tugs are your feelings a bit. You kind of want him to be bad but it’s also extremely satisfying when he’s good.

Phipps is able to write this in such a way that each book feels different but also the same. It’s that your bed after you travel kind of comfort. You just fall right back into it.

Sometimes I dive into the storyline, but in this one, know that Gary is challenged again. Merciless is forced to choose between good and evil and finds a way to be good… while being evil in some roundabout way. And that there are both old and new Supers included.

Of course, the narration by Jeffrey Kafer just tops it off. He’s able to give the dry and witty banter of Merciless and pretty much everyone around him in such a way that it’s even funnier than Phipps’ writing. He takes the already excellent book and makes it even better.

An absolute blast from beginning to end The Secrets of Supervillainy might be one of my favorites in this series. There were some (not overly done) damsel-in-distress parts that Phipps was able to do in such a way that it didn’t feel like it was pandering.

Merciless, the Supervillain without Mercy (TM), is back with even bigger problems! How far will he go to fix his wife's current state of being a soulless vampire? Can he ignore his growing feelings for Cindy, despite their difference over the new Star Wars movie? Can he survive the wrath of the president of the United States (whom he accidentally stole billions from)?

While he ponders those personal issues, Death has a new mission for him. The greatest hero on Earth has killed, and she isn't pleased. Death wants the murder solved and the perpetrator given the kind of justice only the Avatar of Death can dish out. Unfortunately for Gary, that's only the tip of the psychotic iceberg.