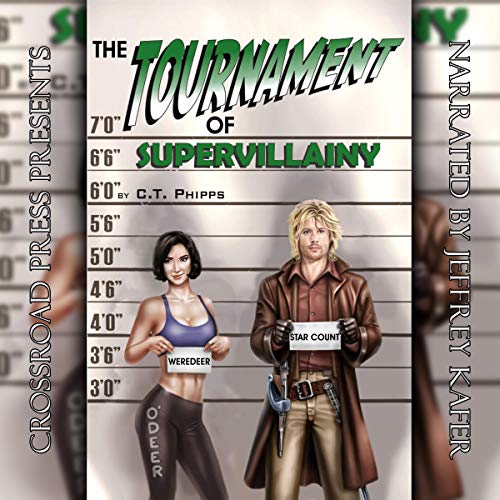 So… Phipps finally did it. He took my favorite characters from his other series… serieses… from his other books and added them to the Supervillainy Saga.  In Tournament he includes Jane Doe from the Bright Falls Mysteries Series and Cassius Mass from Lucifer’s Star (both pictured in the cover), along with Agent G.  Phipps was able to include them without making it feel forced and also made it really enjoyable if you’ve read the other books in their own worlds.

Book five, while I heard/read via Goodreads took a while to get out – I happened to read it about 1.5 weeks after book four and I can see where some people would have been mad.  Having ravenously read this series over the last few months the books keep getting better and better.  For a while, they were getting sillier and sillier to the point where I was worried that Phipps was going to go off the deep end with the books, but book five reels it in a bit.

We’re introduced to yet another bad guy – this time its Entropicus, the Space God of Evil.  Now, we find out there is a tournament to save the existence of the multi-universe. Giving Gary/Merciless and the gang a reason to fight definitely helped this book and this series take a slightly serious tone to it.  Don’t get me wrong, Phipps’ wit and snark are still around in Tournament – they just aren’t the main attraction.

Take all of what I said above and throw in the masterful storytelling ability of Jeffrey Kafer and you have a really enjoyable book.  Tournament would eek into my favorites just because of the cross-stories with Jane, Agent G, and Cassius but even without those, it was an excellent book that I flew through.

I’m not sure where Phipps will take book 6 but know that I’m caught up – I’m eagerly awaiting its release.

Gary Karkofsky, aka Merciless the supervillain without mercy, is presently the most disliked supervillain in the world. Superheroes don't want to just throw him in jail, they want to deliver an epic beat down for ending their golden age by killing Merciful, the superhero with mercy. His fellow supervillains aren't much better, either jealous of his success or loathing him for all the other baddies he's killed. Also, what's up with his wife, Mandy? She's been acting extra strange since getting her soul back (long story). That's when Gary receives an invitation to the Primal Fighting Tournament - an interdimensional contest involving all the universe's greatest warriors. The prize? A wish with no limitations. Gary can finally get on that world domination thing he's been putting off.

Unfortunately, Gary is competing against good and evil way above his league. Not only Gabrielle Anders, aka Ultragoddess, his former fiancée, but Entropicus, the Space God of Evil. Thankfully, Gary has allies from unexpected sources including Jane Doe, the protagonist of I was a Teenage Weredeer, G from Agent G, and Cassius Mass from Lucifer's Star.