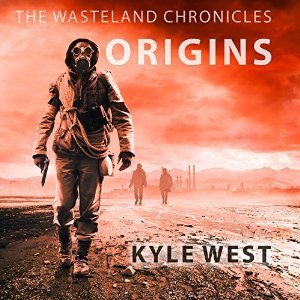 Everything they know will be tested

Origins tells the continued story of Alex, Samuel, and Makara as they continue to travel across the former United States in search of Bunker 1.  Along the way, they will need the help of unexpected friends and meet many scary foes.  The Xenovirus is continuing to take lots of life throughout the wasteland.  Follow the ragtag group of survivors as they continue to fight across the arid landscape to discover the truth.

The narration for Origins was done by Graham Halstead the same narrator who narrated the first story in the Wasteland Chronicles series, Apocalypse.  Halstead does a great job again, and I’m always happy to have a continuation of the story told by the same narrator.  It really helps me as a reader/listener get into the story and the characters when I really feel like I know their voices.

Origins, by name, confuses me.  I thought that this was the first book in the series, but I was wrong.  Then I thought about it, and with the way that the story was told and the things that the reader finds out when reading this book–it makes sense to me.  Origins is a tale of survival and a tale of new friendships.

The writing was really well done.  It was crisp, concise, and really allowed the reader to follow the story without being interrupt with random details or unneeded info.  I am excited that there are more stories in this saga, and I am eagerly looking forward to reading the third book soon.

Without ruining anything, the ending was a BIG surprise to me.  I wasn’t sure what to expect, but I was shocked by it, to say the least.  At first, I thought West was just going to leave it with an anti-climatic finale, but I was totally wrong.  I do not believe in spoilers and will not write them if I can help it — but just know, you’re in for something when you finish Origins.

Ragnarok was only the beginning. Buried in Cheyenne Mountain, Colorado, is the massive Bunker One. Long conquered by the spawn of the Xenovirus, it is now the mission of Alex Keener, Samuel Neth, and Makara Angel to find the fallen Bunker, or die trying. Contained within are the mysterious Black Files, which may be the key to stopping the Xenovirus before it is too late.

But one thousand miles of post-apocalyptic desert stand between the team and their goal, and human hostiles and killer dust storms are the least of their worries. They must make it to Bunker One before the winter snows bury it...and before anyone else can claim the files as their own.

Kyle West is the author of multiple best-selling Science Fiction and fantasy novels. He has written two series, The Wasteland Chronicles, and The Xenoworld Saga, and has eleven books to his name. He’s pretty much a nerd, and if you’ve taken the time to actually read this because you’re interested in his novels, then you probably are, too.

Kyle enjoys reading, traveling, a good cup of coffee or well-mixed drink, among other things he can’t really think of at the moment (spoiler alert: he’s the one writing this bio). He enjoys cycling and lifting weights, mostly as a means to be fully prepared for the pending zombie apocalypse. He resides in the bustling metropolis of Oklahoma City.

Meanwhile, you can find him at the following cyber haunts: