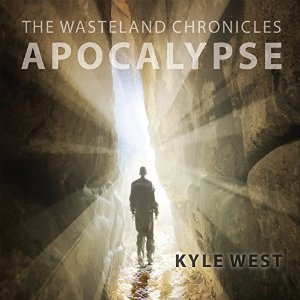 The wasteland can be a very scary place

Alex Keener just turned 16 and one of the first things that young adults inside of Bunker 108 do when they turn 16 is to go outside for a routine recon run.  Things aren’t like a normal recon, though, he quickly finds out that there is a lot more going on than he imagined.  Follow Alex as he has to make important decision after important decision.

The narration for Apocalypse was done by Graham Halstead and he does a really great job.  I honestly do not know Halstead’s age, but I do know that he was able to portray a young male really well.  His voice for Alex was perfect; part angsty teenager and part new adult.  The production quality is perfect with no issues at all.

The first thing that I noticed was the parallels to the video game Fallout’s universe.  There were many numbered bunkers where certain citizens were able to hide out from something dangerous.  In Apocalypse they were “US Bunkers” and in Fallout, they were Vaults.  I honestly was so convinced that this could potentially be fan-fiction based in the same universe that I had to look up Kyle West’s description.  It’s not based in the same Wasteland, but there are some similarities that Fallout players will really enjoy. Other parallels include what they called the outside “The Wasteland” and those who live there “The Wastelanders.”  I’m sure there were others, but the story itself was so good that I found myself forgetting about most of these details.

The “Xenovirus” that plays a background part to most of the story is really interesting.  So is the history of “Ragnarok” the reason that all of the people have run to the bunkers.  Sometimes post-apocalyptic books go so much into detail about the people that they forget to explain why they are in the predicament that they are in the first place.  West really knocks it out of the park with his explanations.

The main character Alex goes through a bunch of things and I mean a lot, that forces him to grow in many ways very quickly.  He is a likable character who you find yourself as the reader rooting for him to succeed against seemingly impossible odds time and again.

Overall, the book had a very gritty feel which the narration added too.  Not a bad kind of grit, but the good kind that all good post-apocalyptic books have in common.  Be on the lookout for Kyle West and his novels.  I think that he has something special.

Alex Keener has lived all of his 16 years underground in US Bunker 108. When he goes on his first recon into the Wasteland, he will find out exactly why.

Outside, Alex discovers a harsh landscape twisted by the impact of the meteor Ragnarok in 2030. Besides Raiders, dust storms, and cold, a new threat is evolving - the Xenovirus, which twists men and animals into deadly monsters.

When the Xenovirus invades Bunker 108, Alex must fight for survival. Joined by a beautiful ex-Raider and an idealistic scientist, Alex discovers that he and his friends might be the only ones standing between the world and a second apocalypse. 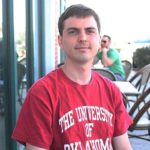 Kyle West is the author of multiple best-selling Science Fiction and fantasy novels. He has written two series, The Wasteland Chronicles, and The Xenoworld Saga, and has eleven books to his name. He’s pretty much a nerd, and if you’ve taken the time to actually read this because you’re interested in his novels, then you probably are, too.

Kyle enjoys reading, traveling, a good cup of coffee or well-mixed drink, among other things he can’t really think of at the moment (spoiler alert: he’s the one writing this bio). He enjoys cycling and lifting weights, mostly as a means to be fully prepared for the pending zombie apocalypse. He resides in the bustling metropolis of Oklahoma City.

Meanwhile, you can find him at the following cyber haunts: