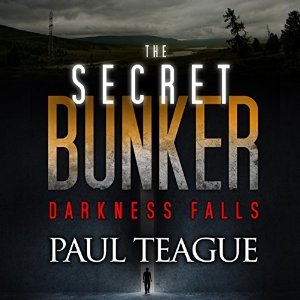 When the darkness falls many questions will be answered. But more will be asked.

A family wins a trip to a secret bunker in the middle of nowhere in Scotland.  While there on a seemingly routine trip, things begin to happen and the bunker is locked down.  Dan Tracy is locked in when the bunker is put in lock down and is eventually found.  But everything inside the bunker has changed and for some reason, he has full access to the entire secret building that he didn’t even know existed.

The narration for Darkness Falls was done by Dan McGowan who does a really good job.  The novel was choppy and written into really small sections and McGowan’s style and poise were the only things that kept me coming back for more.

I almost stopped reading/listening in the first 20 minutes or so.  The book. is. so. choppy. Especially on audiobook.  I’m 100% okay with short chapters especially when I’m trying to read a book.  But this had normal length chapters with really choppy random changes of direction.

The book jumps around a lot, which leads to some really hard reading/listening on my part.  And the book just sort of ends.  If you’ve been a follower of my blog for any time you know that I don’t mind trilogies but I hate when a book just ends.  Especially when I feel like the arc of the story hasn’t even begun to be completed.  Darkness Falls is another in the “trilogy mindset” that falls a little short to me.

Now, I did actually like the premise of the story, and I definitely want to continue it.  I just feel like there are some things that need to be closed up for me to feel like I’ve read a full book instead of a piece of episodic fiction.

Overall, Darkness falls is able to overcome some of its shortfalls and is a pretty enjoyable read.  Just be warned that listening to this on audiobook is rough but not because of the narrator, just the way it was written.

A twin who died in mysterious circumstances …

A family lured to a special place at a particular time …

And then the darkness falls.

Dan Tracy has left school to become home educated by his dad, after some unspecified and mysterious ‘difficulties’ at school.

When the family wins a rather unusual holiday competition, they set off on what begins as a regular family holiday.

But on a day-­trip to a disused Cold War bunker, the family gets caught up in life-­threatening events which have cast a sudden and terrible darkness over the surface of the planet, putting all known life to sleep and causing havoc in its wake.

Dan’s family are separated in the panic that follows.

24 hours after the darkness descends, the bunker undergoes a massive transformation and it emerges that the dusty old Cold War bunker is actually a state-­of­-the-­art operations centre which has been hiding in open view for many decades ­- but its modern­-day purpose is unclear.

Trapped inside the bunker as deadly events unfold beyond its heavy doors, it soon emerges that those caught inside were gathered there at a specific time by an unknown organisation.

Dan realises that he and his family are part of something bigger than they could ever have imagined and the world is in perilous danger from a malevolent organisation based on earth, with hints of extraterrestrial connections.

As the story moves to its climax, Dan makes an incredible discovery which could threaten the very existence of life on Earth ­ and finds that the key to human survival lies in his own genes and those of his twin, who died in a tragic road accident several years earlier.

Separated from his family as the entire planet becomes surrounded by a deathly blackness, Dan Tracy must figure out what’s going on below ground.

The bunker is at the centre of a conspiracy to destroy the Earth – but there’s something special about Dan and his twin that could stop the terrorists dead in their tracks.

Who will be left to hear Earth’s final screams?

The Secret Bunker: Darkness Falls is the first in a trilogy of books by author Paul Teague.

I’m a former broadcaster and journalist with the BBC, but I have also worked as a primary school teacher, a disc jockey, a shopkeeper, a waiter and a sales rep.

I wrote my first book at the age of 9 years old.

Titled ‘Mr Plum And Mr Apple’, the hand­ written story received the inevitable rejection slip, but that didn’t stop me dabbling with writing throughout my life.

I have written short stories, plays, letters for magazines and hundreds of web articles, even a couple of self-­published marketing books, but never a full­-size fiction book.

‘The Secret Bunker’ was inspired by a family visit to a remarkable, real-life secret bunker at Troywood, Fife.

I love dystopian fiction (I didn’t even realise that there was an official word for it until my daughter told me) so this competition has been a great opportunity to finally come up with my own vision of a future world where things are going haywire.

The Secret Bunker blog can be found at: http://thesecretbunker.net/

My next project is called ‘The Grid’ and you can watch as it takes shape towards the end of 2015 here: http://thegridtrilogy.com/

I am the author of several web guides aimed at small businesses which are sold under the ‘Stuff Made Simple’ brand.