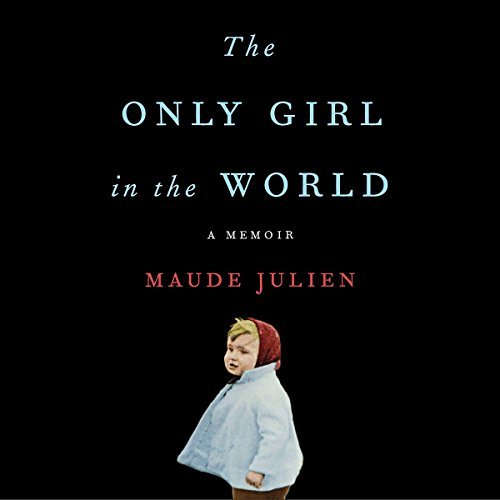 Maude Julien’s memoir, The Only Girl in the World, is an impeccably written, beautifully narrated first-person account of hope, strength, and perseverance that is incredibly difficult to listen too. I found this book to be much like a car crash—I knew I shouldn’t look but I couldn’t look away. It was a captivating, disturbing, and ultimately inspiring tale.

Written from Maude’s perspective as a young girl, The Only Girl in the World takes readers and listeners back in time to a time period between the First and Second World Wars, when her father, Louis Didier, became enamored with Nietzsche’s theory of Ubermensch. The novel begins with a bit of backstory, as Maude explains that she was not her father’s first or only victim. In 1936, her father, convinced that he could raise a superhuman, if the child was “properly physically, mentally and emotionally trained from birth,” persuaded a young impoverished couple from Lille to relinquish custody of their daughter, Jeannine, to him. He promised them that Jeannine would have a comfortable, financially stable life, complete with a university-level education, under one condition: they would never see her again. Twenty-two years later, Jeannine gave birth to Maude and the second phase of Didier’s plan begins.

Didier soon isolates his wife and young daughter, moving them to a large, remote home in Northern France, limiting their exposure to outsiders, restricting their access to news and information, and strictly controlling their few excursions into the real world. The telephone, for example, is in a locked box and radios are strictly forbidden, outsiders are limited to tutors, construction workers, groundskeepers, and guests of her father, and Maude’s only friends are the animals who live within the walled lawns of the estate.

Through young Maude’s eyes, we pass through the gates and see behind closed doors, joining Maude as she experiences unthinkable pain and suffering at the hands of her parents. After years of “willpower training exercises,” long bouts of silent treatment, strict discipline and carefully controlled education, it’s amazing to hear how hopeful Maude remained, and how her small rebellions, each act of passive-disobedience, allowed that hope to stay alive. As the story progresses, Maude grows and so does her determination. Her escape isn’t a climatic suspenseful Hollywood type escape but the sense of relief I felt was palpable and in no way diminished the stories resolution.

The Only Girl in the World is a fascinating account of the trauma and abuse Maude endured as a child that is as painful as it is uplifting. Her story is horrific and the pain she survived is difficult to comprehend but Maude’s resilience and sheer determination not only to survive but to escape was simply awe-inspiring

For listeners of Room and The Glass Castle, an astonishing memoir of one woman rising above an unimaginable childhood.

Maude Julien's parents were fanatics who believed it was their sacred duty to turn her into the ultimate survivor - raising her in isolation, tyrannizing her childhood, and subjecting her to endless drills designed to "eliminate weakness". Maude learned to hold an electric fence for minutes without flinching and to sit perfectly still in a rat-infested cellar all night long (her mother sewed bells onto her clothes that would give her away if she moved). She endured a life without heat, hot water, adequate food, friendship, or any kind of affectionate treatment.

But Maude's parents could not rule her inner life. Befriending the animals on the lonely estate as well as the characters in the novels she read in secret, young Maude nurtured in herself the compassion and love that her parents forbid as weak. And when, after more than a decade, an outsider managed to penetrate her family's paranoid world, Maude seized her opportunity.

By turns horrifying and magical, The Only Girl in the World is a story that will grip you from the first minute and leave you spellbound, a chilling exploration of psychological control that ends with a glorious escape.