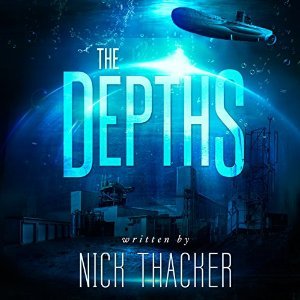 Dive deep into the depths of this awesome adventure

Jen Adams son has been kidnapped, and her boss has been brutally murdered.  These things may have something in common, but Jen did not think that diving to the bottom of the Atlantic Ocean was even in the realm of possibility once she tries to find her son.  There, at the bottom of the ocean lays a research center, thought abandoned more than 30 years prior.  Follow Jen, and the Royal Marines into this bubble as they try and figure out what Jen’s boss was studying and why he was murdered, along with finding her son along the way.

The narration for this, like the other Nick Thacker full novel, was done by Mike Vendetti.  I liked the narration a lot for this, but with the breadth of characters and scenes, the audiobook version took a little away from the story, but not enough to discourage anyone from listening to this.  Vendetti does a wonderful job voicing the different characters, from Royal Marines to scientists, he keeps you interested throughout this story.

The only reason that this didn’t get a full-on 5 out of 5 was just due to my confusion of characters from time to time.  I finished this book the other night and I believe that two of the characters had a similar or the same first name.  And unfortunately, listening to it doesn’t make it any easier.

When I started The Depths, I found myself wondering how we were going to be getting down to the bottom of the ocean like the description says, but Thacker doesn’t take too long guiding the reader with him on this incredible adventure.  The cover art is amazing, and I was really excited to figure out how this played into the story.  Part mystery, part technothriller, The Depths has something for readers of many genres.

The scenery that Thacker paints of this research center literally gave me chills.  I can’t imagine how it felt to discover this bubble at the bottom of the ocean and to get to explore it.  The whole team was even surprised that it was still intact, let alone almost functioning.

Jen and her husband’s characters were really a fascinating couple to follow as this story weaves between them and others.  I found myself wanting it to get back to their point of views every time it would switch to others.

The mysterious scientists who are just kind of lulling around add a really unique feeling to this book, making me look around the room before turning off the lights at night.

Thacker once again proves that he can write about anything and make it thrilling.  A master of the modern day thriller.

When Jen Adams’ son is kidnapped and her boss is brutally murdered, she and her husband are thrown into a hunt to find out why. The mystery takes her and a team of soldiers and scientists deep beneath the Atlantic Ocean – to a research station lying under five miles of water one of the deepest oceanic trenches on the planet. The station has been abandoned for over thirty years, and no one knows what to expect when they get there. As they begin to learn more about the station, however, they find out there’s something the base is trying to hide – something that could prove devastating for the rest of the world…