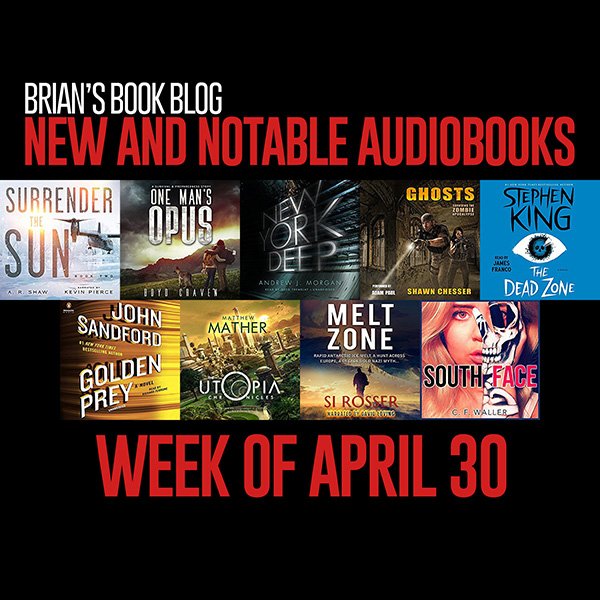 Here are the books that were released the week of April 30th that I think are new and notable. I’ve mentioned any Whispersync deals, if more come up after posting, please leave a comment and let me know!

Book covers and bolded titles have affiliate links to Amazon (where you can buy the Audible version). Clicking these help me keep this site running, so thank you if you do. 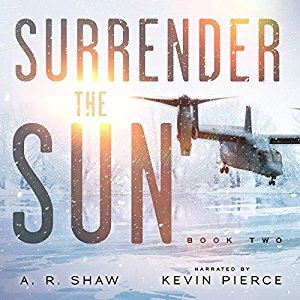 From the best-selling author of the Graham’s Resolution series comes book two in the Surrender the Sun series.

Conditions in Coeur d’Alene, Idaho, are proving unsustainable in the year 2030. The mini ice age, caused by the Maunder Minimum effects, are brutal at best, and life systems are limited and failing fast. Bishop seeks a safe haven for his new family and the only answer leads him back to his nightmares.

Leaving the comfort of their luxury hotel is their only answer, but the journey may prove more perilous than their current existence.

For those who like a little vigilante justice in a post-apocalyptic world. 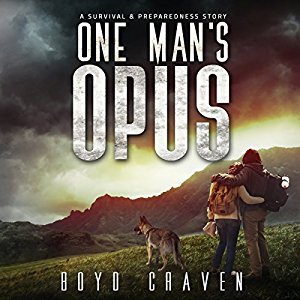 One Man’s Opus: A Survival and Preparedness Story by Boyd Craven III
Narrated by Kevin Pierce

Rick is like many Americans. He’s concerned with what he sees on the news, and how the country seems to be ready to tear itself apart. His biggest concern has been civil unrest. Already an avid camper, he sets out to secure his future, and career, by finding his own Eden.

Tina is a small-business owner and knows what she wants in life. She and her furry companion find themselves at gunpoint when Rick walks back into her world and forever changes the dynamic between them.

One dog, who’s been the savior, protector, and companion…Opus. The owner of two humans that mostly understand him. Mostly.

When the police walk into an ambush, a series of events forces the couple to bug out. The problem with having to leave for a small town, at a remote location, is it really isn’t a secret. Small towns bring their own problems with crime, and power plays. Everybody knows everybody, and the gossip mill runs as fast as lightning.

Will the trio be as prepared as they need to be? 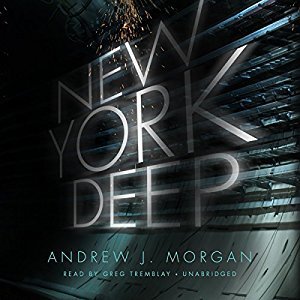 Deep below Manhattan, tunnel engineer Josh Reed leads his team as they excavate the East Side Access extending New York’s railway service. But sparks fly as the drill hits an unusual crystalline material – one Josh has never seen before. They push on, and Josh discovers something even more unexpected: a vast room, empty and lifeless – or so it seems.

When Josh finds out that the CIA are now looking for him and that his coworkers have gone missing, he turns to his best friend and boss, Lionel Parker, for help. Together they unravel the mystery of the room, what’s inside it, and why the CIA are so desperate to keep them silent. It’s nothing they could ever have expected. 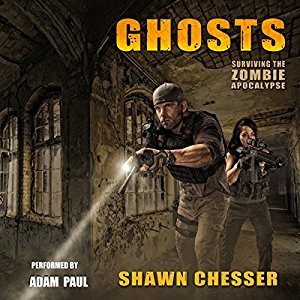 Cade Grayson, father, husband, and former Delta Force operator collected his fair share of ghosts as the Omega virus ravaged the United States, turning the majority of her population into mindless automatons hungering for human flesh.

Wearing incredulous stares, the faces of those ghosts – dozens of men, women, and children he was unable to save during his many forays into the Z-infested wasteland – visit him nightly during the early morning hours when defenses are dulled and REM sleep has him in its firm grip.

For others who lost contact with loved ones during the frantic first hours and days of the Omega outbreak, their ghosts manifest in the nagging possibility that a wife or child or mother or sibling may still be alive out there, somewhere, struggling to survive amongst the multitudes of walking corpses and roving bands of murderous breathers.

So as the Eden survivors prepare their rural Utah compound for the coming fall and winter they find that the herds of dead patrolling the nearby State Route aren’t their only enemy.

Idle time seems to be giving power to their ghosts. And with each perceived whiff of familiar perfume, or flash in the side vision of a familiar form that proves to be nonexistent, the lure of wanting to know their fate begins to affect some of the group adversely.

Even after attaining a modicum of closure in the high country of central Idaho, Duncan Winters continues to seek solace for his loss at the bottom of a whiskey bottle. 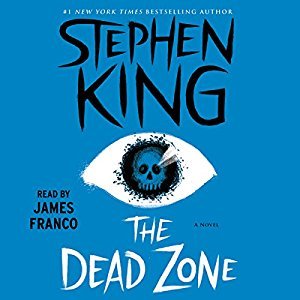 The Dead Zone by Stephen King
Narrated by James Franco

Never before on audio! A number-one national best seller about a man who wakes up from a five-year coma able to see people’s futures and the terrible fate awaiting mankind in The Dead Zone – a “compulsive page-turner” (The Atlanta Journal-Constitution).

Johnny Smith awakens from a five-year coma after his car accident and discovers that he can see people’s futures and pasts when he touches them. Many consider his talent a gift; Johnny feels cursed. His fiancée married another man during his coma, and people clamor for him to solve their problems.

When Johnny has a disturbing vision after he shakes the hand of an ambitious and amoral politician, he must decide if he should take drastic action to change the future. The Dead Zone is a “faultlessly paced…continuously engrossing” (Los Angeles Times) novel of second sight. 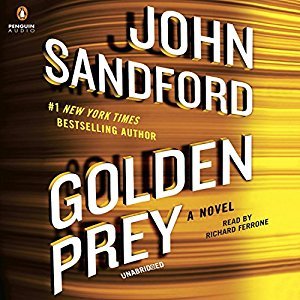 The man was smart, and he didn’t mind killing people. Welcome to the big leagues, Davenport.

Lucas Davenport’s first case as a US marshal sends him into uncharted territory in the thrilling new novel in the number one New York Times best-selling series.

Thanks to some very influential people whose lives he saved, Lucas is no longer working for the Minnesota Bureau of Criminal Apprehension but for the US Marshals Service, and with unusual scope. He gets to pick his own cases, whatever they are, wherever they lead him.

And where they’ve led him this time is into real trouble. A Biloxi, Mississippi, drug-cartel counting house gets robbed, and suitcases full of cash disappear, leaving behind five bodies, including that of a six-year-old girl. Davenport takes the case, which quickly spirals out of control as cartel assassins, including a torturer known as the “queen of home-improvement tools”, compete with Davenport to find the Dixie Hicks shooters who knocked over the counting house. Things get ugly real fast, and neither the cartel killers nor the holdup men give a damn about whose lives Davenport might have saved; to them he’s just another large target.

Filled with his trademark razor-sharp plotting and some of the best characters in suspense fiction, Golden Prey is further reason why “Sandford has always been at the top of any list of great mystery writers” (The Huffington Post). 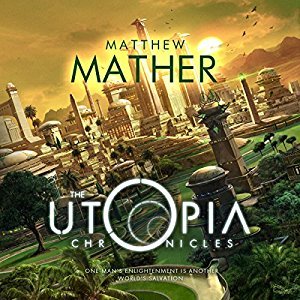 Robert Baxter once reveled in the intoxicating delights of Atopia – the man-made island where humans lose themselves in a world of boundless virtual realities. Now, Bob has returned to immerse himself in this mind-altering, consciousness-sharing refuge from the eroding Earth.

But something is very wrong. Bob feels a tidal wave of doom cresting above the pleasure dome that is Atopia. As alternate universes perish, the salvation of all he loves – and all that exists – rests with Bob alone. To save the future, he must journey to the farthest edge of the past, where existence itself began and Atopia’s deepest secrets may lie. Yet even the knowledge Bob ultimately gains may not be a match for an enemy as powerful as a god, and as all-consuming as death… 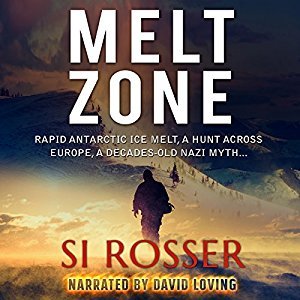 A mysterious structure is found buried beneath the Antarctic ice. Undiscovered for decades…it should have remained that way.

A team of climatologists are sent on a routine expedition to Antarctica to investigate a rapidly melting glacier, where they make a startling discovery…. In Europe, a secret Nazi document surfaces which points to a historical government secret, and which appears connected to events unfolding in Antarctica. Robert Spire, tasked to hunt for the secret document, soon becomes the hunted, as he is chased across Europe in this fast-paced action thriller. Spire soon discovers that sinister forces are at work. Forces that will do all they can to protect the secret that lies buried beneath the Antarctic ice….

In 1938, the German New Swabia Expedition left Hamburg for Antarctica aboard the MS Schwabenland. The secret expedition arrived at the Princess Martha Coast, in an area which had been claimed by Norway as Dronning Maud Land, and began charting the region…75 years later, satellite photographs discover something very odd occurring in Eastern Antarctica….

Just before Europe’s Envisat satellite malfunctions, it photographs a mysterious melt zone during a fly-over of Eastern Antarctica. After analyzing the photographs, the UK’s GLENCOM – Global Environmental Command – Unit, sends three of its climatologists to investigate, but as they search the site, a vast crevasse opens in the ice, swallowing them up. They survive the fall, but make a startling and lethal discovery.

A hunt across Europe….

GLENCOM agent and environmental lawyer, Robert Spire, is tasked to investigate a Cologne-based company whose origins appear linked to the events unfolding in Antarctica. As Spire suspects a possible government conspiracy, things take a sinister turn, as clues lead him to the discovery of a 70-year-old Nazi document and an Antarctic mystery that may have lasted for 70 years.

In 1989 Karl Blaine and his wife Fiona traveled to Nepal to climb Mt. Everest with their college friend Zachary. Only Zachary came back alive. Two decades later, in 2009, a French climbing expedition discovers Karl’s frozen remains. Of the five man party who finds Karl, only the Sherpa guide makes it down alive. He brings with him a whooper of a ghost story no one can believe.

When a much older Zachary is notified of this discovery, it sets off a dangerous chain of events that puts Zachary and Karl and Fiona’s son, Derrick, on a collision course. What did Karl have in his possession when he disappeared? What really happened in 89? Can what the Sherpa guide reported really be true? And one other question…. Is Fiona Blaine still entombed at the top of the world?

June 8th New and Notable Audiobooks on B