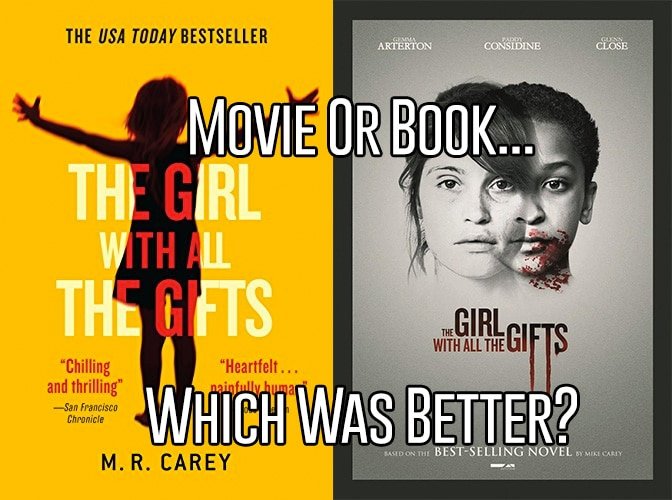 The never-ending debate.  Which was better, the book or the movie?

I just finished reading The Girl With All The Gifts just a few days ago upon my wife’s suggestion.  After finishing it, a day or two later we sat down to watch the movie.  I’ve read a lot of books that have been turned into movies, and vice versa so I decided to write up some of the differences that were glaring and rough to me.  I’ll also touch on some of the things they got right.

The first and most annoying difference between the movie and the book was the difference between the two main characters.  It’s like the director of the movie decided to flip them.  Honestly, Miss Justineau in the movie was close to how I’d envisioned Melanie, just a little older.  The opening line of the book states: “Her name is Melanie. It means “the black girl”, from an ancient Greek word, but her skin is actually very fair so she thinks maybe it’s not such a good name for her.”  That inconsistency really upset me, but I got over it because the actress who played Melanie in the movie was brilliant.

The movie (as with most/all movies) takes some of the dead time out of the book.  They were traveling for a long time before they came across the tank-like vehicle in the book, but in the movie, it seemed to be just days if not hours.

Another thing that really bugged me was Dr. Caldwell tells Melanie about what the actual disease/pandemic is.  Melanie is an incredibly curious girl throughout the whole book (and movie), but the book really built on the unknown a lot more.

But, I will say that for how in depth the book was — the movie got a lot of it right.  Granted Mike Carey wrote the book and the screenplay, so that must help.  But there was a lot more in this movie than not.  All the characters I expected were there and because it’s a movie, where more “real” and like-or-hateable.  The scenery was exactly as I expected — which surprised me a bit.

The amount of blood and gore in the book is pretty well translated to the movie — which was needed.  The book is visceral at times which added to the grittiness of it. I’m glad that the movie was able to capture the same feel.

My biggest worry would be that the ending wouldn’t be the same (I’ve been trying to write this article without spoiling much and it’s nearly impossible). I was terrified that they were going to clean up the ending and make it more “Hollywood”.  But, being that this wasn’t a Hollywood film (thanks, UK!) they did not do that.

Overall, those who have read the book will be a little disappointed with some of the things they left out or changed.  But to be honest, I think that the movie did a pretty great job capturing the book as a whole.

One thought on “Movie or Book… Which Was Better: The Girl With All The Gifts”