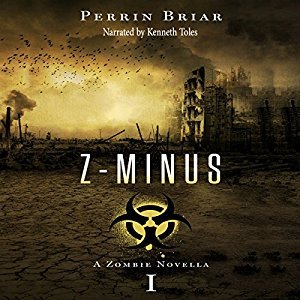 Not my cup of tea

Sometimes you get a book that is a letdown. It’s expected.  You’re not going to like every book you pick up. But, then there are times when a book seems like it’s going to be good and you almost feel punk’d when it’s not the book you were expecting.  Sadly, that’s what happened with Z-Minus I.

The main character Chris might be one of the most hateable characters I’ve ever read in a book. This might get to be a little spoiler-y, so just skip to the next paragraph if you’d like.  Chris was an alcoholic, abusive, borderline pedophilic (I don’t know what the age of consent is in the UK, but I’d assume it’s not 15), who literally tried threw rocks at his 8 year old daughter so that he didn’t have to take care of her (he never wanted her to come along at all).  I’ve read books where the main character was a POS, but had redeeming characteristic (Wormwood Dawn). And I’ve read books where there was someone who was this easy to hate – but they weren’t the main character. I kept waiting for the turning point, but one never really came.

Other things that really bothered me was how adult-like his 8-year-old daughter was.  Sure, she was the victim of physical abusive from her drunken father and he tried to leave her for dead during the intro of a zombie apocalypse.  But, you wouldn’t think that she would be totally grown up yet, even with that kind of baggage.  On top of that, she at one point learned how to drive a stick shift, in a Porsche, in one or two tries.  I didn’t learn how to drive a stick shift until I was a late teenager and I almost burned the clutch out of an old Honda in my first 25 attempts to switch gears.  Now, I can suspend disbelieve in most zombie books, but this was a little too far fetched for me.

Even if I were to look past all of these things (I finished the book AND I still want to check out the second book) the narrator just killed what I had left.  He, unfortunately, decided to try and use a girlish voice to narrate the 8-year-old girl.  Sometimes this can be done and I don’t even notice it, and others — it’s so noticeable that it pulls me from the story… this was the latter.

Overall, not a recommended audiobook.  If you like really messed up characters — you might enjoy the book, though.

Once infected, the virus shuts down organs, kills nerve impulses, and even reprograms the way we think. The virus becomes us.
But the process takes eight hours.

If you only had eight hours left to live, what would you do?

For Chris Smith, that decision has been made for him. He's infected, and returns home to find the rest of his family undead or missing, save his youngest daughter Maisie. He's never been much of a father, but can he make up for it now in the final few hours of his life and find somewhere safe for her to survive?

3 thoughts on “Audiobook: Z-Minus I by Perrin Briar (Narrated by Kenneth Toles)”