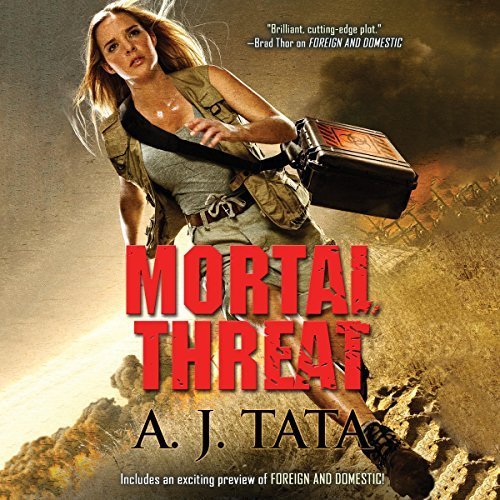 I was excited about this book when I read the synopsis and it didn’t let me down.  I wasn’t sure how hard it was going to be to jump in four books into a series but it wasn’t bad at all.  I’m not even sure which characters would be reoccurring in the other books but I did really enjoy it.

The story revolves around a medical student who has stumbled upon what she thinks is a cure for Ebola and HIV. With help from two orphans-turned-helpers, she is able to help the villagers in rural Africa by battling off HIV and Ebola. The problem is that a solution like this would be worth billions of dollars and could potentially save hundreds of millions of lives. Enough money to kill for.

The action in Mortal threat was spot on.  It was perfectly described and timed out.  Every time the action picked up you could really tell that Tata had a sense of timing everything out just right and keeping your heart rate up throughout the scene.

I also thought that the “media-bending” actions performed by the main protagonist in the story were creepily like things I’ve seen on the TV and read online lately.  Very believable and realistic.

The narration was really well done too.  I’ve never listened to a book read by Cendese before but I thought he did a great job with Mortal Threat.  The action was perfectly described and the scenes were “set” well with his voice.  He knew when to speed up and when to slow down. I thought it was a really well-narrated book.

It’s hard to write about the final scenes of the book without ruining it so I won’t do it.  If you’re curious what I really thought (especially if you read it yourself, let me know, find me on twitter and I’ll tell you what I thought).

Overall, Mortal Threat was about as good as I expected it to be.  There were more layers of the onion of this story than I expected, but all small enough that they weren’t palatable. It was definitely good enough that I want to check out Tata’s other titles.

Medical school student Amanda Garrett and American doctors working secretly in Africa have found a cure for the Ebola and Human Immunodeficiency Viruses.

Leaders of the Islamic State want the cure so they can show the world Islam is a benevolent religion that all Africans should follow.

The President of the United States believes an alleged 30,000-year-old Sub-Saharan religious text called The Book of Catalyst identifies him as being of divine origin.

As Amanda operates her portion of the clandestine CIA Project Nightingale in a Tanzanian orphanage, she is attacked and chased by brutal killers called The Leopard and The Cheetah. Amanda has 48 hours to escape across the Serengeti Plain before the remaining vials of the cure expire.

The Islamic State escalates attacks across the Middle East using freshly converted fighters from Africa. The American President, however, chooses not to deploy sufficient troops to save U.S. Special Forces, including Amanda's husband, assisting in the air war against ISIS.

As Amanda attempts to save the rapidly decomposing formula for the Ebola and HIV cures, she finds herself at the center of a clash between warring media titans, Jonathan Beckwith and Zhor al Rhazziq, who are following her every step toward the Olduvai Gorge, which some scientists claim to be the origin of human life.

National bestselling author AJ “Tony” Tata’s is the author of the popular Chayton “Jake” Mahegan series, featuring ex-Delta Force captain Jake Mahegan, a Native American from North Carolina’s remote Outer Banks region. Tony is a retired army brigadier general, who parlays his combat experience into fast action thrillers. Foreign and Domestic was a short listed finalist for the 2015 Best Thriller Barry Award. Three Minutes to Midnight and Besieged received starred reviews from Publisher’s Weekly. Besieged, the third book in the Mahegan series, was selected by PW as a Top 10 Thriller of 2017. Foreign and Domestic became a National Bestseller spending two weeks on the Barnes and Noble and Hudson Booksellers mass market paperback bestsellers list, ranking as high as #6 during its third week in publication. As one reviewer put it, “Chayton Mahegan outside the law, under the radar, out for vengeance…”

Graduating from the United States Military Academy in 1981, his many assignments as a paratrooper and combat infantryman, include command of a paratrooper battalion in the 82nd Airborne Division and an air assault brigade in the 101st Airborne Division. His last combat assignment was as the deputy commanding general of the 10th Mountain Division and Combined/Joint Task Force-76 in Afghanistan. BG Tata has deployed on combat missions and operations in Afghanistan, Kosovo, Macedonia, Bosnia, Panama and the Philippines. He has been awarded the Combat Action Badge and Bronze Star, is a Master Parachutist and a graduate of the U.S. Army’s Ranger School.

Tony served as a National Security Fellow at Harvard University’s JFK School of Government, and earned an M.A. in International Relations from the Catholic University of America and a Master of Military Art and Science from the Army’s School of Advanced Military Studies. Notably, he is listed as a distinguished member of the 502nd, 504th, and 505th Parachute Infantry Regiments. He is also a graduate of the Broad Superintendents Academy and served as the Chief Operating Officer of Washington, DC Public Schools during Michelle Rhee’s tenure as Chancellor and went on to lead the Wake County (Raleigh), North Carolina public school system, the 16th largest in the nation. He served as the Secretary of Transportation for the state of North Carolina from January 2013 to July 2015.

Tony is an avid surfer and enjoys spending time with his two children, Brooke and Zachary.

The Extinction Agenda by Michael Laurenc